Kingsport News, 23 November 1944
Silver Star for Piney Flats Man given in France
With U.S. Forces in France – The Silver Star has been awarded posthumously to Sergeant Bruce O. Tester, of Route 2, Piney Flats, Tennessee, for gallantry in combat in France, with an Armored Infantry Regiment of the Second Armored Division.
On July 29, Sergeant Tester was car commander of a half-track on a misson of reconnaissance for an important armored task force. Near St. Nenis le Gast the vehicle came under heavy rifle and machine gun fire from the town and the surrounding fields. Sergeant Tester ordered his vehicle to continue to move forward and he personally manned a 50 caliber machine gun located in the center of the town. He remained in an exposed position firing his weapon until he was killed. His aggressiveness in remaining at the forward position gave his unit an opportunity to bring up heavier weapons and dispose of the opposition. 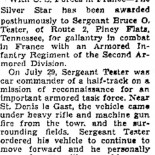