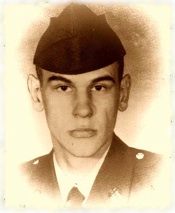 Private First Class Bradley Keith Watts was born on January 19, 1948, and was originally from Harriman, Tennessee. He served his country in the viet War in the United States Army, as an infantryman in E Company, 51st Infantry, Americal Division. He began his tour in Vietnam on August 3, 1968. A little over a month later, on September 16, 1968, PFC Watts was killed in action under hostile conditions in Quang Nam province, South Vietnam. He was 20 years old when he died. PFC Watts was buried in Dyllis Cemetery, Roane County, Tennessee, and is memorialized on the Vietnam Veterans Memorial on Panel 44W, Line 67. The following is an online tribute left for PFC Watts:

Neil Wilson
Classmate, Fellow Vietnam Vet
Both Keith and myself attended the same small high school in the small town of Oliver Springs in the hills of East Tennessee. While the wall reflects Keith as being from Harriman, Tennessee, that was only his mailing address he attended and graduated from Oliver Springs High School in 1966. I graduated in 1965. I can still picture in my mind the tall lanky teenager from those days. We were both members of the FFA. I left for the Marines after graduation and had lost touch with Keith. By 1968 I knew he was both in the Army and in Vietnam. I was headed for home late on a Friday night in September of 1968 from Camp Lejuene, North Carolina with a set of orders for Vietnam. When I started getting close to the Tennessee state line I began fiddling with the radio, trying to pick up a Knoxville radio station. As soon as one came in, the announcer said “East Tennessee soldier is killed in Vietnam”. For some reason, that I still can’t explain, I knew the name would be Keith Watts. It was. I pulled over to the side of the road for a short pause. My wife attends church with Keith’s mom. She still misses Keith so much. Some years back a soldier called her and asked if she was the mother of Keith. She replied yes. He replied “I was with Keith when he died”. His name was Steve Franklin. Over the years Steve and Louise have become very close. Both had a need that each could give. For Louise is was the relief that someone was with her son on that tragic day. For Steve it helped ease the painfull memories, that he still carries, of a battle so long ago. Steve sends flowers to Louise every mothers day.