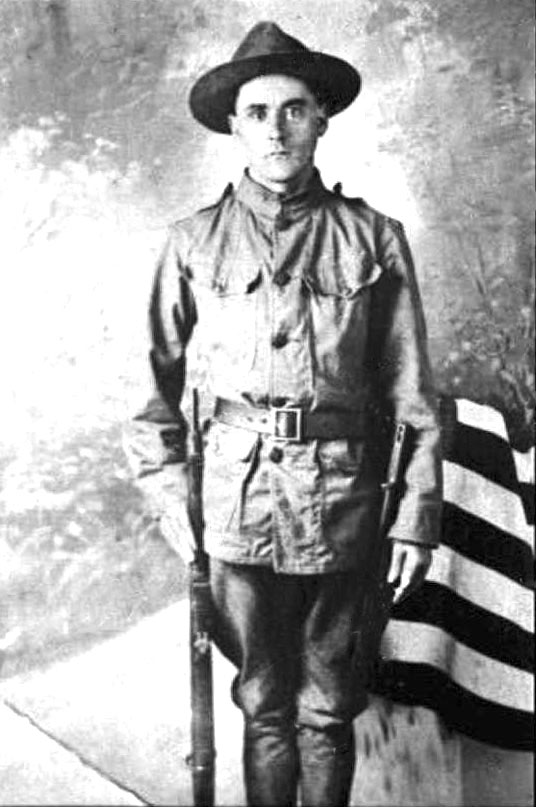 John was born in Johnson City, Washington County, Tennessee on 2 July 1898. His father died just a few days after he turned one year old and his mother passed away when he was nine. He lived with a neighbor and two of his older sisters (Mary and Lena) while he was growing up. John was living in Toledo, Township of Green Mountain, Yancey County, North Carolina with his sister Lena and her husband when he enlisted in the National Guard on 17 July 1917 with the rank of Private. John was assigned to Company F, 3rd Infantry Regiment, Tennessee Army National Guard that was based in Johnson City.

Eight days later the 3rd Infantry was called to active service in the United States Army on 25 July 1917 and would soon become Company F, 2nd Battalion, 117th Infantry Regiment, 59th Infantry Brigade. John was instructed to report to Johnson City just after this. He and the company were dispatched to and arrived Camp Sevier, Greenville, South Carolina for training on 8 September. There they would join units from North and South Carolina, as well as those from Tennessee to form the core of the 30th Division, later known as the Old Hickory Division in honor of General and President Andrew Jackson. John was promoted to Private First Class on 29 October 1917 and then two months later to Corporal on 29 December.

John departed Camp Sevier on 5 May 1918 with Company F for Camp Mills, Long Island, New York to await transportation overseas. After boarding the SS Northumberland in Brooklyn, they set off for Liverpool, England on 11 May and arrived on 23 May. After disembarking the ship, he and his Company boarded a troop train enroute to the port city of Dover for their channel crossing the next day. They arrived the port city of Calais, France on the 24th. As the 30th Division piecemealed into France just as they had done into England, they were taken to Audruicq by train and marched the short distance to the various villages known as the Eperlecques Training Area in France. John was billeted with Company F at Nortbecourt and began Phase “A” Training with the British 39th Division on 10 June 1918.

Phase “A” was to be completed on 10 July, but was extended to the morning of 16 July. Phase “B” began the same day for the 30th Division with a three day march into Belgium. Upon arriving the Poperinghe Area, Company F was billeted in one of the numerous camps and were intergraded over the next month into actual battlefield operations and trench warfare conditions with active combat units. Phase “B” was completed on 10 August and Phase “C” the last training phase was cancelled and the 30th were declared combat ready. Operational orders came in on the 14th and the 30th Division was to relieve the British 33rd Division starting the night of 16 August in the Canal Sector near Ypres, Belgium. The Ypres-Lys Offensive began on 19 August 1918 and the 30th would be in the thick of the fighting to the very end of the war.

John and the 30th were given a breathing spell after being relieved from the Ypres-Lys Offensive on 5 September and were entrained to the St. Pol area and billeted at Siracourt, France to resupply, do some more training and get a little rest from all the heavy artillery explosions. On the 17th the 30th Division made the move to the Puchevillers Area where they would come under the control of the 4th British Army on the 21st as would the American 27th “New York” Division to join in the Somme Offensive, also known as the One Hundred Day Offensive.

On 17 Oct, John was Killed in Action on the first day of the Battle of the Selle, also known as the La Selle River near Le Cateau, Nord, France. He participated in two Unit Campaigns: Ypres-Lys Offensive in Belgium and the Somme Offensive in France. He also fought in the Battle of Bellicourt on the Hindenburg Line and at the Battle of Montebrehain. John was 20 years old and was first interred at the American Military Cemetery in Bony, France.

He was disinterred in June 1921, placed in a casket and sent to Antwerp, Belgium for his voyage home aboard the United States Army Transport Ship Somme on 23 June 1921. John arrived Hoboken, New Jersey on 7 July to await transport with his escort back to Tennessee. He was reinterred at Mountain Home National Cemetery in Section A, Row 15, Site 2 later this same month. The cemetery is located inside the city limits of Johnson City, Tennessee just across the field from where John was born and played as a young lad.

John’s the only son of Joseph Emanuel Bowman and Alice Ollivee “OV” White. 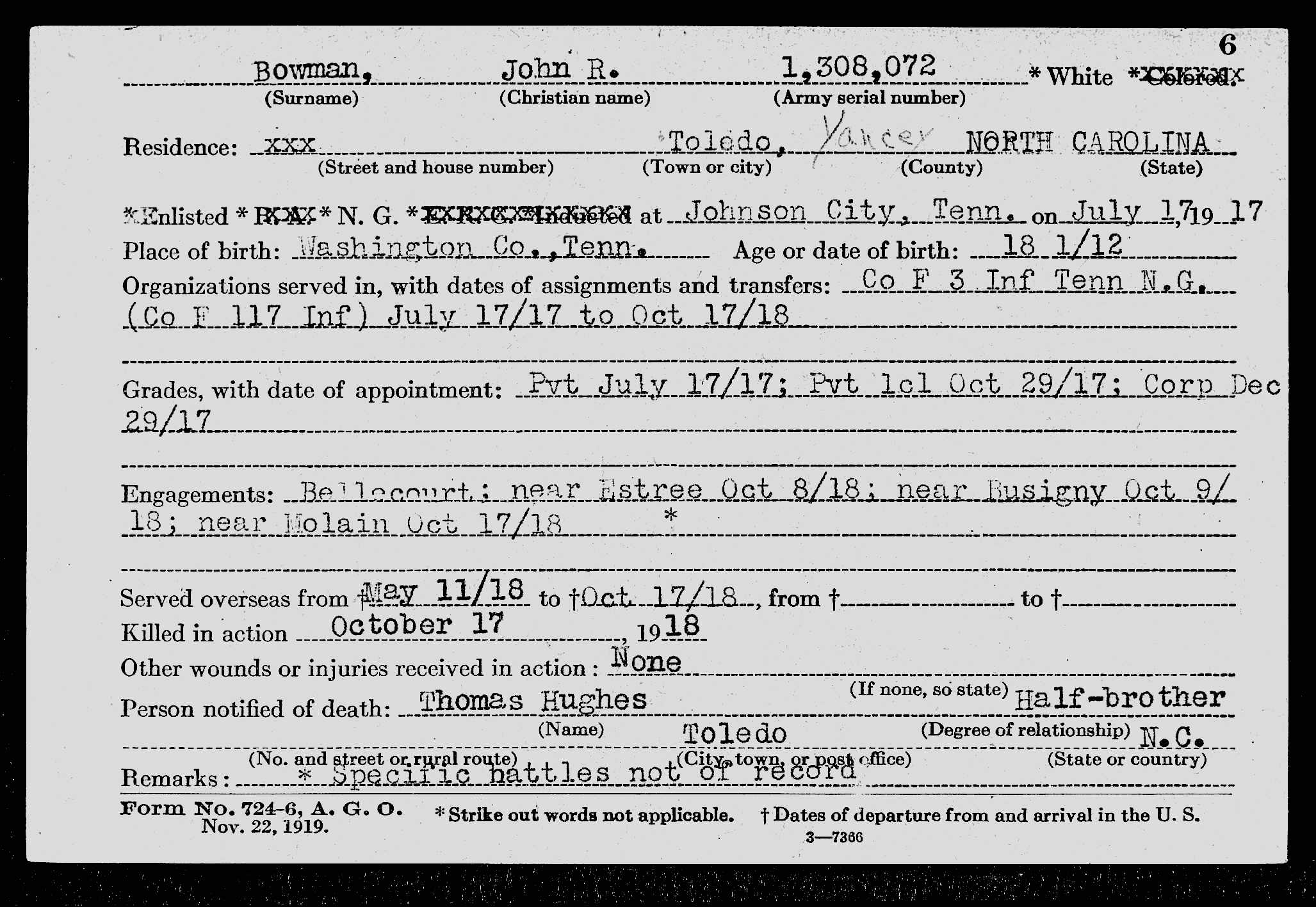 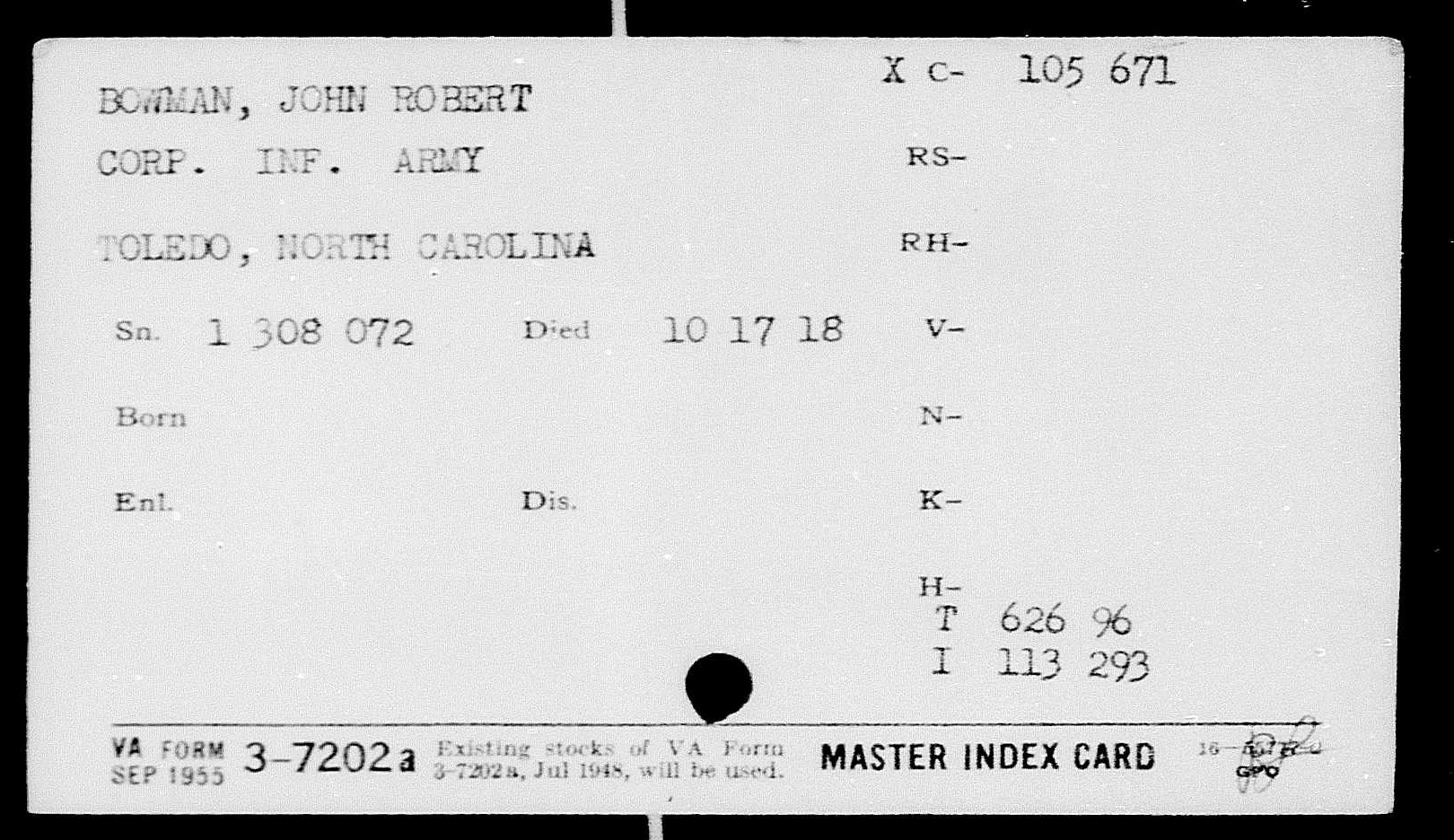 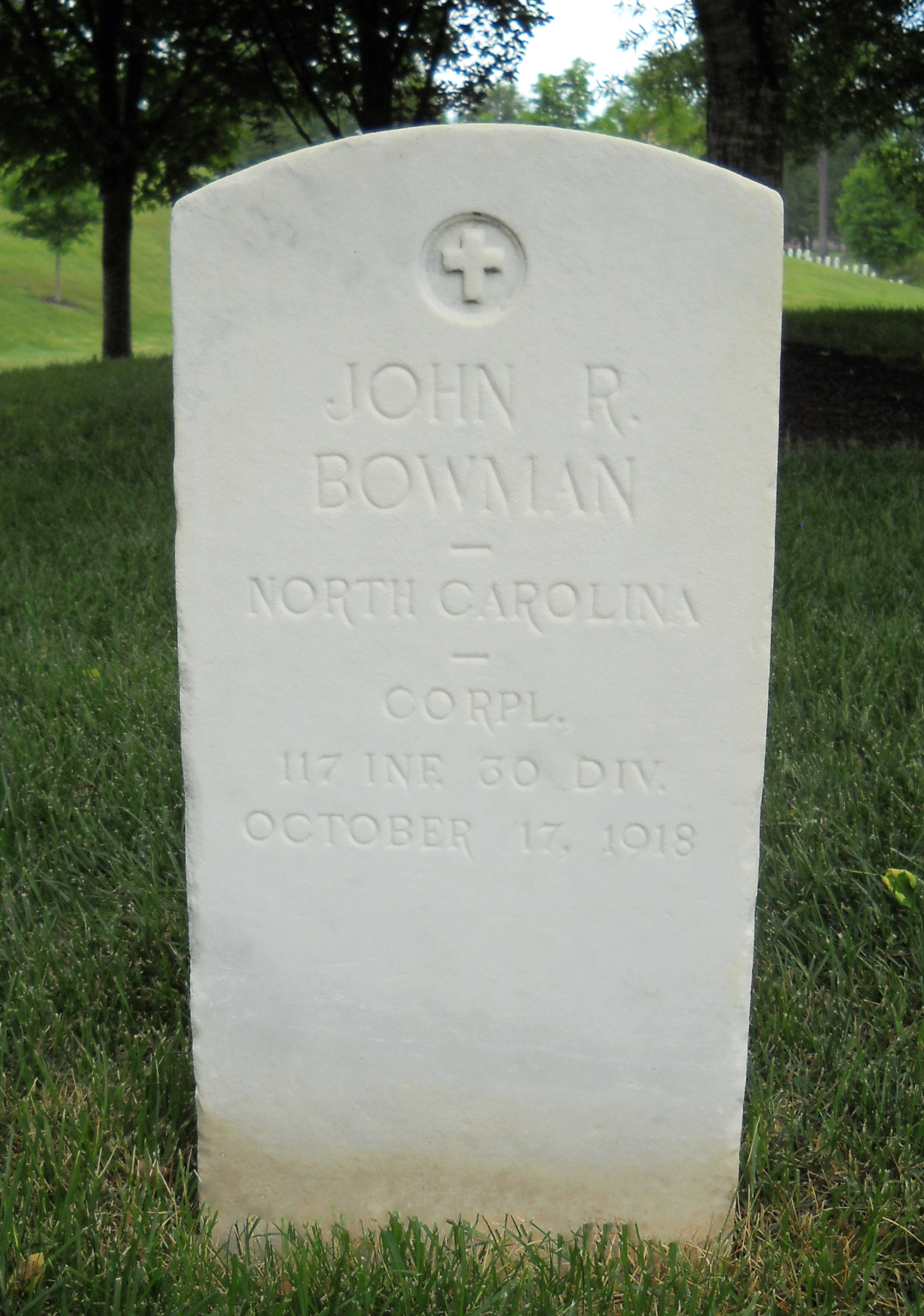 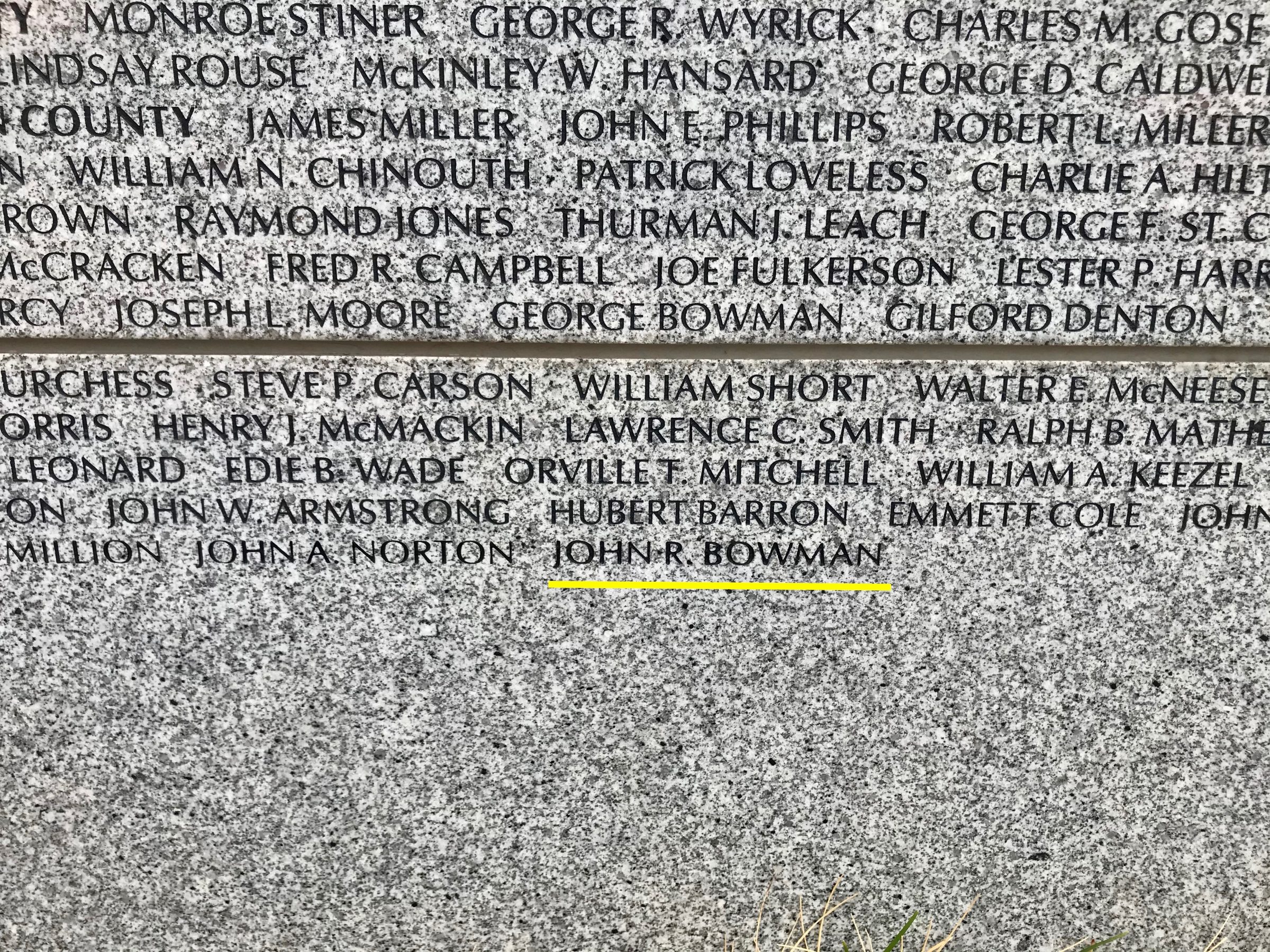