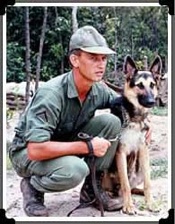 Denis McDonough
Denis1146@aol.com
Fellow Vietnam vet
Bobby, I just wanted you to know you are loved and missed. My prayers to you and your family. Bobby Shelton was born on May 7, 1944. He became a member of the Army while in Flag Pond, Tennessee and attained the rank of SP4 E4. On September 29, 1967 at the age of 23, Bobby Shelton gave his life in the service of our country in South Vietnam, Binh Duong Province. Bobby Shelton was awarded the Bronze Star for Valor, the citation reads Sp4 Shelton distinguished himself by heroic actions on 29 September 1967 in the Republic of Vietnam. On this date Specialist Shelton was serving as a Scout Dog Handler attached to the Second Battalion, Fourteenth Infantry conducting a search and destroy operation in the Ho Bo Woods. At approximately 1330 hours on this date Sp. Shelton was working his Scout Dog in advance of the company’s point element when the dog gave a strong alert to the left front of the company. With complete disregard for his personal safety Sp. Shelton advanced farther in front of the company in order to determine the source of the alert. Reaching a hedgerow he broke through without waiting for the point element to precede him. As he came to the other side of the hedgerow his Scout Dog again alerted. Again with complete disregard for his personal safety Sp. Shelton, knowing that enemy contact was eminent, exposed himself in order to warn the elements of the company that followed him that enemy contact was eminent. As he did this, the enemy opened fire with automatic weapons mortally wounding him. Sp. Shelton’s heroic actions in the performance of his duty saved the elements behind him from being ambushed by the Viet Cong force. This outstanding display of aggresiveness, devotion to duty, and personal heroism is in keeping with the highest traditions of the military service and reflects great credit upon himself, his unit, and the United States Army. more info You can find Bobby Shelton honored on the VietnamMemorial Wall on Panel 27E, Row 31. Thanks to Jim Summers for supplying the information on Bobby.
Thursday, February 03, 2005

Dog Is Bewildered During Memorial Men of the 25th Inf Div’s 38th Scout Dog Platoon gathered recently to pay tribute to one of their members killed in action against the Viet Cong. The saddest member of all of them never said a word, but glanced repeatedly at the weapon and beret of his master. Held at the 1st Bn, 27th Inf Wolfhound’s chapel, the service was in memory of Sp4 Bobby J. Shelton of Flagpond Tenn., who was killed while on a search and destroy operation deep in the HoBo Woods. Paddy, his dog, took it hardest of all, said Plt. Leader First Lieutenant John Anderson. All morning he wandered around looking for him. Paddy was trained at Lackland Air Force Base in Texas, and was one of the dogs to arrive with the unit in Vietnam in July of 1966. Paddy has been on continuous combat operations with the 25th Div since that time. Shelton was a product of the 38th Plt’s own training program given at the unit’s Cu Chi base camp. The program accepts volunteers from the division and trains them to be combat dog handlers. Paddy will be retrained to another master, says Anderson. but it takes a while to adapt to someone new.
Thursday, February 03, 2005