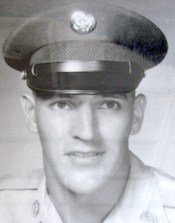 Kingsport News, 11 January 1967
Morristown – The family of PFC Bobby Joe Quinn, 24, Morristown, was informed Tuesday by the Defense department of his death Monday by hostile action in Vietnam.
Quinn, believed to the first local casualty in the war, is survived by his wife, Saundra, and his parents, Mr. and Mrs. Joe Quinn.
The Defense Department telegram said he was killed by a hostile mine and small arms fire while on a road clearing project. He had been in the service since last July. 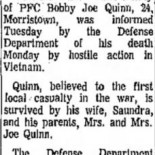