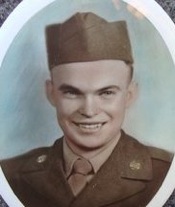 Corporal Bobby Gaskel Anderson was a member of the Medical Company, 17th Infantry Regiment, 7th Infantry Division. He was killed in action while fighting the enemy in North Korea on July 9, 1953 in the battle of Pork Chop Hill. He was returned to his hometown of Crossville and is buried at Crossville City Cemetery.

Crossvilel Chronicle, September 17, 1953
Last rites for Corporal Bobby Anderson, son of Mr. and Mrs. Felix Basil Anderson who made the supreme sacrifice for his country on a Korean front, were held at the Cumberland Homestead Baptist Church, September 13. Corporal Anderson joined this church in 1947.
Corporal Anderson was serving in the Medical Corps with the 17th Infantry Division when he was killed in action on July 9, this year. He enlisted on November 28, 1951. Prior to this he had graduated from Homesteads High School, and attended Temple University in Chattanooga.
Besides his parents he is survived by three brothers; Roy, Ralph and Bill; two sister, Betty and Faye; his fiancee, Miss Lula Jo Pugh; both grandparents, Mr. and Mrs. B. Anderson of the Homesteads, and Mr. and Mrs. W.C. Ashburn, who live in Putnam County. 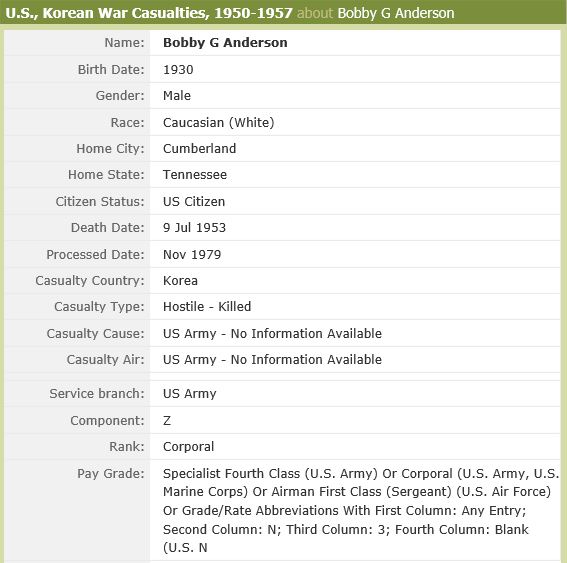 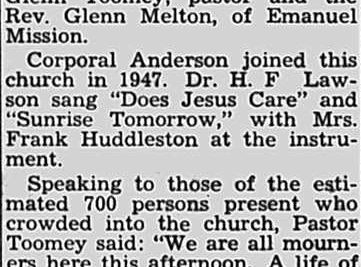 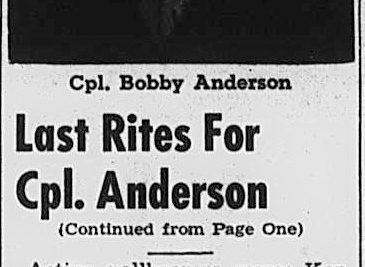