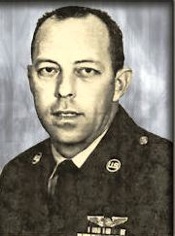 Staff Sergeant Beryl Stanley Blaylock was born on June 17, 1934, and was originally from Crossville, Tennessee. He served his country in the Vietnam War in the United States Air Force, in 772nd Tactical Airlift Squadron, 463rd Tactical Airlift Wing, 7th Air Force. He was a ten-year veteran of the Air Force when his tour in Vietnam began on March 19, 1968. A little over a month later, on April 26, 1968, SSgt. Blaylock was killed in a plane crash in hostile conditions at Thua Thien province, South Vietnam ; he was 33 years old at the time of his death. SSgt. Blaylock is buried at Mapleview Cemetery in Smyrna, Rutherford County, Tennessee, and is memorialized on the Vietnam Veterans Memorial on Panel 52E, Line 14.

Died in the crash of a C-130 during Operation DELAWARE, intended to interdict Viet Cong activities in the A Shau valley.

OPERATION DELAWARE, which began 19 April 1968, was intended to disrupt enemy activities in the western part of the A Shau Valley. On 25 April, US cavalry units air assaulted into the abandoned airstrip at A Luoi. The location of the A Luoi Airfield was approximately 1 mile west of Highway 548, the primary road running through the A Shau Valley and part of the NVA’s infiltration route through Laos and into this vital sector of South Vietnam. It was also adjacent to a sector of eastern Laos located in rugged jungle covered mountains approximately 25 miles west-northwest of the A Shau Valley, Saravane Province, Laos.

The area was a primary north-south artery of the Ho Chi Minh Trail, and Highway 922, which branched off and ran directly east where it crossed into South Vietnam at a strategic point near the northern edge of the A Shau Valley. It was also the Ho Chi Minh Trail’s control center and contained the largest NVA storage facility outside of North Vietnam.

On the 26th, in weather with ceilings as low as 300 to 500 feet, C-130s from Cam Ranh Bay, Bien Hoa, and Tan Son Nhut were tasked with air-dropping supplies to the cavalrymen. The first 20 C-130s received antiaircraft fire, and seven of them were hit.

At 14:16 hours (2:14 p.m.), Major Lilburn R. Stow, pilot; Major John L McDaniel, pilot; and Sgt. Larry R. Todd, loadmaster; were three of an eight-man aircrew of the 21st C-130 (C-130B tail number 60-0298, call sign Terry 605). Upon arriving in the area, Major Stow established radio contact with ground control for landing instructions. Once cleared in, the Herc made its final approach when it was hit heavily by .51 caliber and 37mm AAA fire and its cargo was set afire.

The pilot elected to attempt an emergency landing on the airstrip but hit trees, crashed, and exploded.

When the wreckage cooled sufficiently, search and rescue (SAR) personnel were able to locate and recover the bodies of 5 of the 8 men on board. They were unable to find any trace of either pilot or the aircraft’s loadmaster. At the time the formal search was terminated, Lilburn Stow, John McDaniel and Larry Todd were declared Killed in Action – Body Not Recovered (BNR).

There is little doubt that Major Stow, Major McDaniel and Sergeant Todd died in the loss of their aircraft along with 5 other men. The Crewmen killed in the incident were: