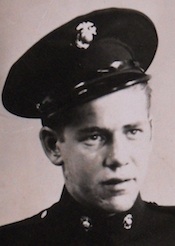 Private Bernie Thompson Byrd Jr., US Marine Corps Reserves, was shipped with the 26th Marines. The 26th Marines were part of the attack on the island of Iwo Jima.

Pvt Byrd was killed in action on the 25th of February 1945. He was buried at sea. He also has a memorial stone in the Eden-Greenwood Cemetery, Jonesborough, TN.