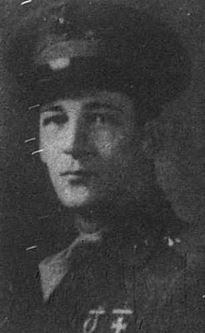 Benjamin Spottswood Preston Jr. was born in Charleston, West Virginia to Benjamin Spottswood Preston and Dannie Kate Rogers. He had lived in Charleston most of his life, but his parents moved to Knoxville five years ago. Before accepting a commission, November 14, 1942, Lieutenant Preston was a lawyer and Insurance claim adjuster at Hartford, Conn.

Navy Cross Citation:
The President of the United States of America takes pride in presenting the Navy Cross (posthumously) to First Lieutenant Benjamin S. Preston Jr., United States Marine Corps (Reserve), for extraordinary heroism while in command of an assault platoon in the Third Battalion, Twenty-Fourth Marines, Fourth Marine Division, during the invasion of Namur Island, Kwajalein Atoll, Marshall Islands, on February 1-2, 1944. Assigned to an extremely hazardous sector, First Lieutenant Preston skillfully and daringly neutralized a series of hostile strong points fortified by pillboxes and blockhouses, then, reorganizing his platoon, continued to engage the enemy throughout the night. On the following day, when his unit was subjected to withering fire from a heavily entrenched Japanese machine gun position, he launched a lone attack, throwing grenades with deadly accuracy and engaging the enemy in hand-to-hand combat until the emplacement was destroyed. Boldly continuing the assault into a trench system behind the gun position, he was attacked by seventeen Japanese and, fighting desperately against this overwhelming force, succeeded in destroying several of the enemy before he himself was killed. First Lieutenant Preston’s valiant leadership and courageous self-sacrifice were in keeping with the highest traditions of the United States Naval Service. He gallantly gave his life for his country. 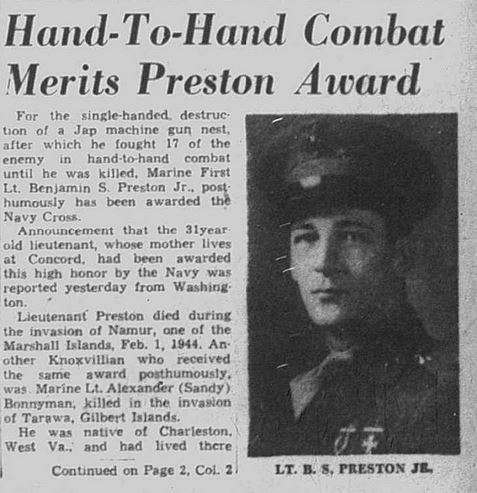