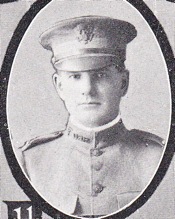 Benjamin J. Cogdill was born January 28, 1881 at Ogle’s Crossroads in Sevier County. He was educated at Harrison Chilhowee Academy and graduated from Lincoln Memorial University’s Medical Department in 1906. He practiced in Sevierville, Pigeon Forge, and Vestal before being commissioned in the U.S. Army Medical Corps.

Dr. Cogdill gave up his medical practice in January 1918 and was assigned to duty as first lieutenant with the 3rd Development Battalion, 155th Depot Brigade, at Camp Lee, Virginia. He contracted pneumonia at camp in October of the same year and died a few days later. He is buried at the Pigeon Forge Baptist Cemetery, Sevier County, Tennessee.

Dr. B.J. Cogdill, a First Lieutenant in the Medical Corps of the Army, died Friday morning at 4 o’clock in a hospital at Camp Lee, Petersburg, Va., where he had been assigned for the past few months. His death resulted from an attack of Spanish Influenza.

Dr. Cogdill volunteered for service in the army early last summer and received a commission as First Lieutenant. He was ordered to Camp Lee, where he was assigned with the medical corps of the army. He was serving in the hospital prior to the fatal attack.

The dead physician was a son of Jonathan Cogdill, of Sevier County, His mother died a number of years ago. Surviving him are his widow and two children, Pink, aged 18 years now employed at a local munitions plant, and Myrtle, 13 years old.
Accompanied by Mrs. Cogdill and her daughter, the body of Dr. Cogdill will arrive in Knoxville this afternoon at 2 o’clock.

The body of Lieut. B.J. Cogdill, M.D., formerly of Sevier County, who died at Camp Lee, Petersburg, Va., Thursday morning, was brought to Knoxville Saturday and will be taken to Sevierville this morning for funeral and interment. Lieut. Cogdill was in the medical department and was stationed at Camp Lee. He was a practicing physician of Knoxville before he enlisted in the army. The deceased was stricken by Spanish Influenza and lived only a short time. Lieut. Cogdill was a brother-in-law of Dr. W.F. Ogle, The funeral will be conducted at Pigeon Forge, near Sevierville, this morning and interment will be in the cemetery nearby. Dr. Cogdill was born and reared at Pigeon Forge. He was the son of Jonathan Cogdill, a well known citizen of Sevier County. Dr. Cogdill came to Knoxville more than a year ago and practiced medicine here.
–The Journal and Tribune, Knoxville, Tennessee, Friday, October 4, 1918 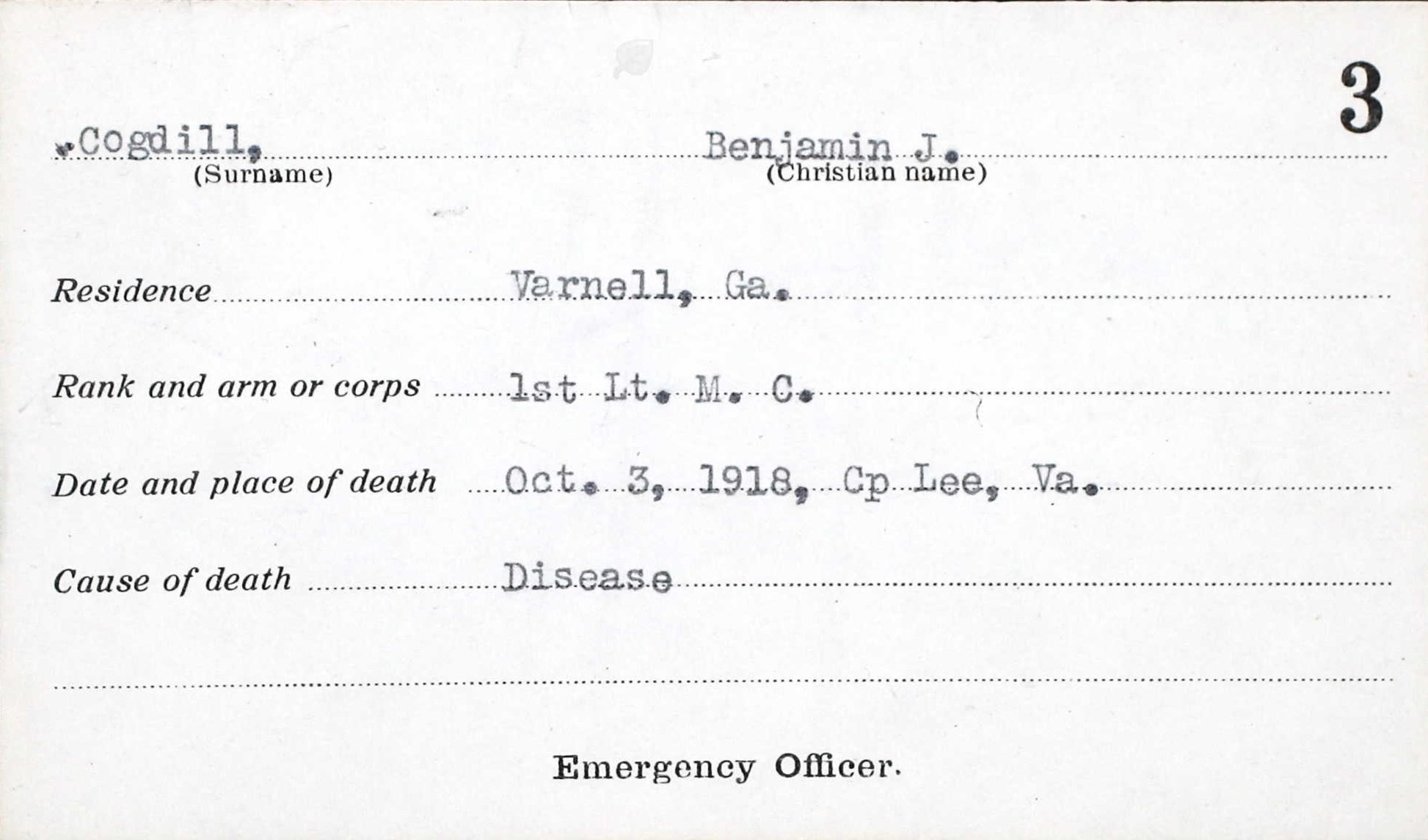 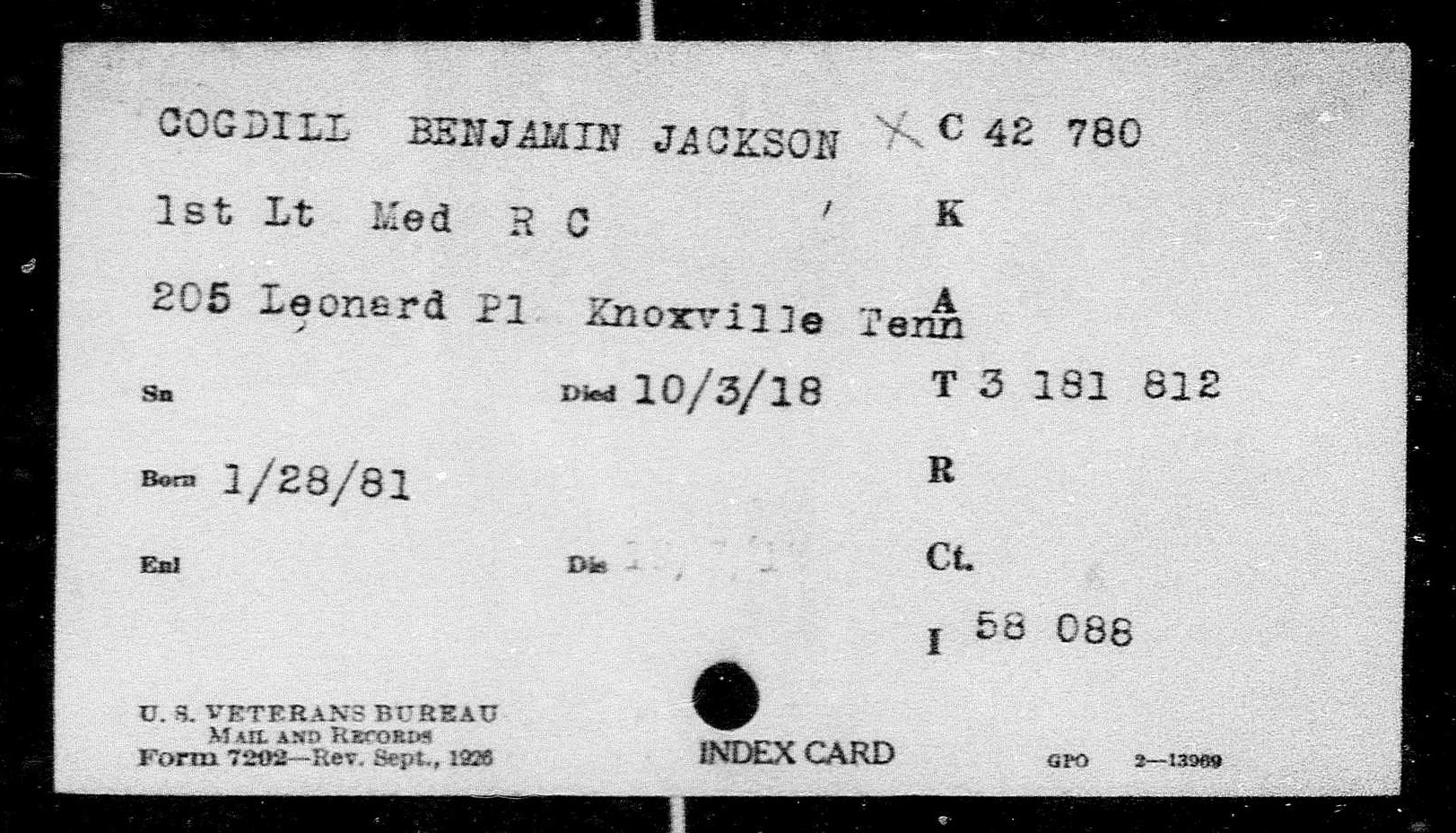