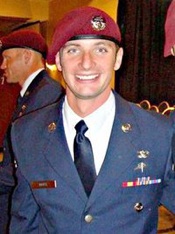 Senior Airman Benjamin D. White, 24, of Erwin, Tenn., assigned to the 48thRescue Squadron, Davis-Monthan Air Force Base. He died June 9, near Forward Operating Base Jackson, Afghanistan, in a helicopter crash. He graduated from Science Hill High School. Ben is the son of Anthony White and Brenda Shelton. He graduated from Science Hill High School in 2004 and attended East Tennessee State University for a few semesters before entering the Air Force. He always wanted to join the Air Force and once he reached that goal he felt a sense of purpose, as though he was doing what he was meant to do.