Pvt Gatliff was one of 750 Prisoners of War that were loaded onto the unmarked Japanese Hellship Shinyo Maru; they had been used as slave labor, working on the Lasang Airfield on Mindanao. The ship was torpedoed by the USS Paddle on the 7th of September 1944, Northwest of Mindanao. Only 82 POW’s survived.

The Knoxville News-Sentinel, April 28, 1943
Pvt. Ben D. Gatliff, grandson of Mrs. J.A. Munday, 2735 Washington Avenue, has been reported a prisoner of war in Japan, according to word received by his sister here, Miss Gloria Gatliff. He was assigned to duty in the Philippines in October, 1941, and was reported missing in action after the fall of Bataan. He is the brother of Radioman David Gatliff, who recently returned from the Solomon Islands, where the ship on which he was stationed shot down 32 enemy planes and sank the four warships. He has been promoted to second class petty officer.

The Knoxville News-Sentinel, November 1, 1944
Pvt. Ben Gatliff, one of a number of American prisoners, aboard a Japanese freighter sunk recently by an American bomber, was not one of the 83 survivors, according to a letter from the war Department to his siter, Miss Gloria Gatliff, 2735 Washington Avenue. 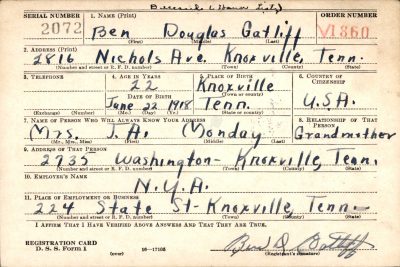 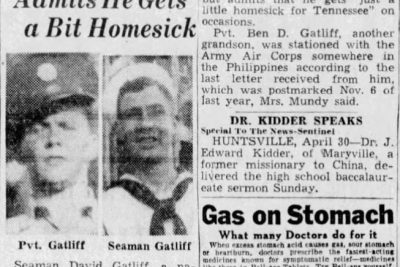 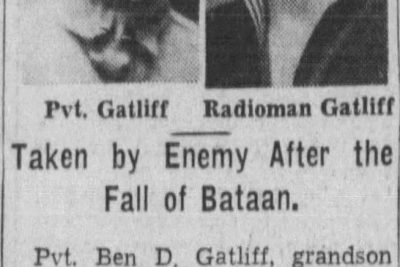 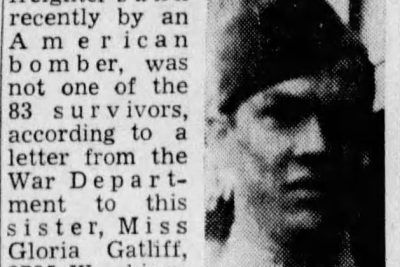