Avery Earl Burnett
Corporal Burnett was a member of the 15th Infantry Regiment, 3rd Infantry Division. He was Killed in Action while fighting the enemy in North Korea.

Monroe Man is Killed in Korean War
Mr. and Mrs. John B. Burnett of Coker Creek have been notified by the Defense Department that their only son, Pfc. Avery Erl Burnett, 22, has been killed in action in Korea. Private Burnett, Who had been in service two years, was killed Nov. 21. the parents were informed.
His father, a vetean of World War I, helped break the Hindenburg Line in Germany.
The second Monroe County casualty of the Korean War. Private Burnett is survived by his parents and three sisters, Misses Arrie May, Essie B, and Shirley Faye Burnett. 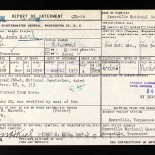