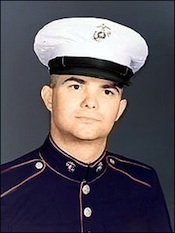 Corporal Augusto Jose Garcia was born on March 2, 1942 in Puerto Rico where he was also raised. Later, he moved to Tennessee, where he lived in both Chattanooga and Cookeville, attending Tennessee Technological University. He served his country in the Vietnam War as a four-year veteran of the United States Marine Corps, with B Company, 1st Battalion, 27th Marines, 1st Marine Division. His tour in Vietnam began on July 17, 1967. One year later, on July 17, 1968, Cpl. Garcia was killed from an explosive device in Quang Nam, South Vietnam, at the age of 26. He is memorialized on the Vietnam Veterans Memorial on Panel 52W, Line 42.

The following are tributes for Cpl. Garcia:

My Dad met my mother while attending Tennessee Tech University. He was living in Cookeville, not Chattanooga. He majored in and loved music and the arts. He was killed just weeks before he was scheduled to come home. I never got the priviledge of meeting him but I know he would have been a wonderful father and he has been my guardian angel for the past 31 years. Thanks, Dad. Love, Cristy
Monday, July 19, 1999

Jose Agustin Mendez Garcia
Nephew
My uncle, although a long-time resident of Tennessee, was in fact born and raised in Puerto Rico. He left behind a wife and a daughter, as well as both his parents, two brothers, a sister (my mother), and a host of other loved ones. He was well loved, and is well remembered by us all. May he rest in peace.
Wednesday, May 26, 1999

Michael Brown
College friend and roommate
The Ultimate Sacrifice
Jose was one of my college roommates and close friends. We were music majors together at Tennessee Tech. His funeral was the day following my wedding. What a graphic example of the price of freedom Jose and so many others paid. I will always treasure my memories of him as a gentle and kind young man with a great sense of humor and a heart of gold. On this Veteran’s Day, I pause to remember and give thanks.
Friday, November 11, 2005

Brian McKibben
As a music major at Tennessee Tech, Jose was like an older brother who was always available for a little advice along with a kind supportive smile. Everyone in our music school was shocked and sadened when we learned of his ultimate sacrifice. He was a true friend that I respected and admired.