Sergeant Audie Hopkins Bishop was assigned to the 303rd Airdrome Squadron. He died non battle 12 July 1945 and is listed on the Tablets of the Missing, Manila American Cemetery, Manila, Philippines.

Sgt Audie Bishop was a passenger on aircraft C-46D with serial number 44-77373. The aircraft was on an Air Evacuation mission from Elmore (Mindoro) to Tanauan (Leyte).

Statement of 2nd Lt Robert W. Daugherty on XA366
On 12 March 1945 about 1045, I observed XA366 with Lt Kelly and Lt Healy taking off at Elmore Strip for Tanauan. Previous to his take-off I had talked to them and found out they were taking Air Evacs to Leyte. At approximately 1300 to 1330, while enroute to Leyte, my radio operator, Sgt. Ray W. Williams, 34435399, reported that he had heard XA366 say he was turning back to Mindoro. That was the last contact we heard from them.

Statement from 1st Lt Bruce L. Marble:
I received a verbal message from Velvet (Tanauan Strip) Operations at approximately 2000 hours on 11 March 1945 to the effect that aircraft XA354, XA353 and XA366 were RON at Elmore Strip, Mindoro.
On the afternoon of 12 March 1945, I again contacted Velvet Operations for possible departure message on our aircraft that remained overnight away from Tanauan Strip on the night of 11 March 1945. At that time no departure message were available. At approximately 1830 hours on 12 March 1945, I again checked for RON message and departure message on XA366, XA364 and XA368. None were available and at that time I asked that a query be sent to determine the whereabouts of these three planes. A later check with Austere Fighter Sector indicated that XA364 had landed on Bohol Island. This was confirmed the morning of 13 March 1945. At 1940 hours on 12 March 1945, XA368 landed at Tacloban, leaving only XA366 unaccounted for.
At approximately 2000 hours, 12 March 1945, another check with Velvet Operations, 433rd Group Operations and 54th Wing Operations was made with negative results. I was informed by 54th Wing Operations at this time that they would initiate a query to all stations. A series of search missions for the whole Leyte, Samar, Bohol, Cebu, Mindoro and Masbate area was scheduled for 13 March 1945, but was unable to take off due to weather.
A series of inquiries was made all during the day of 13 March 1945 with Velvet Operations, 433rd Group Operations and 54th Wing Operations. No answer to any of the inquiries was available.
At 1615 hours on 13 March 1945, the 69th Troop Carrier Squadron Communications sent a message to Base Operations, Elmore Strip, Mindoro requesting information on XA366, ayet no answer has been received. 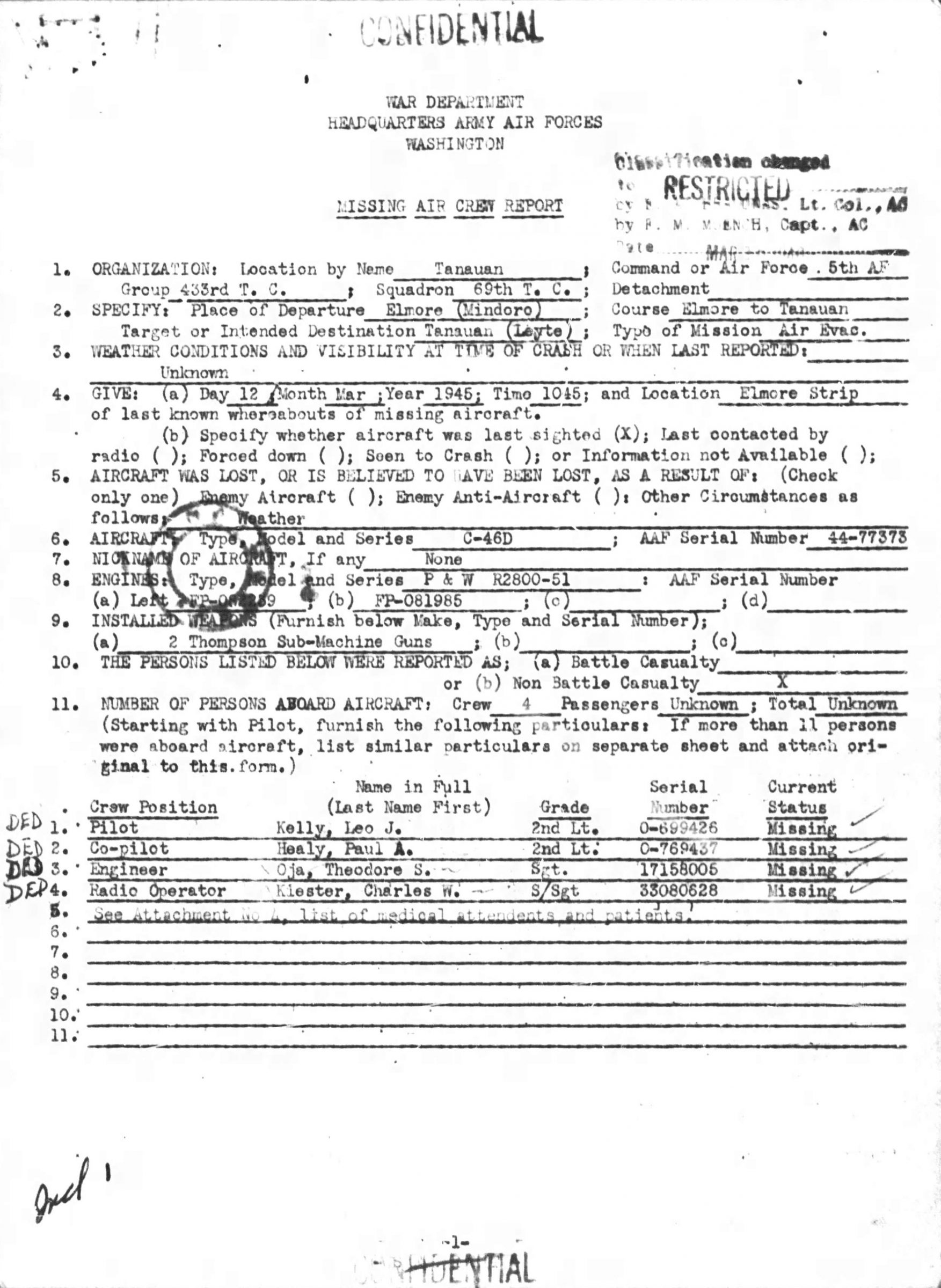 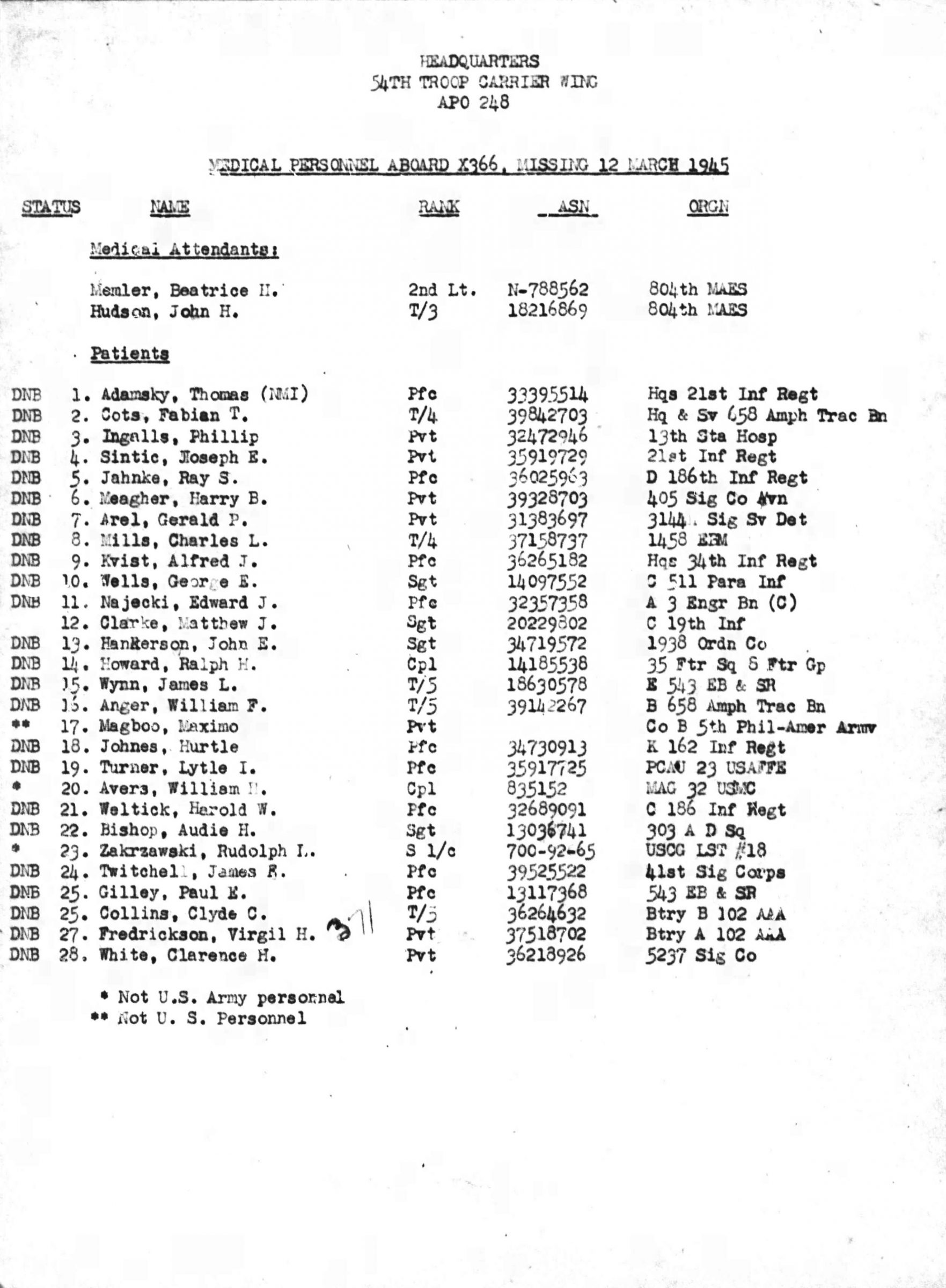