The Bristol Herald Courier, 9 October 1944
Cpl. Arthur R. Combs, Jr., 27, popular young Bristolian, was killed in action in Belgium September 13, his parents, Mr. and Mrs. A.R. Combs,  Anderson street, were notified late Saturday night by the War department. Cpl. Combs, known for his genial nature among a wide circle of friends both in Bristol and Abingdon, Va., where he attended William King high school before the family moved to Bristol, had participated in four major battles and had fought with the 18th Infantry Cannon company as a gunner with the First Division in the invasion of North Africa and Sicily, where he served in the Seventh Army under General Patton, and in the Normandy invasion. He had been awarded the Bronze Star decoration recently for gallantry in action and had received two other decorations for meritorious achievement.
Cpl. Combs began his service in the army in January, 1942, and received his training at Camp wheeler, Ga., Camp Blanding, Fla., Fort Benning, Ga., and was stationed at Indiantown Gap, Pa., just before he was sent abroad in July, 1942. He was first sent to Scotland and England and was with the American forces invading North Africa. He took part in the Tunisian struggle and was then sent across the Mediterranean when Sicily was invaded. Following the Sicilian battles, “Junior”, as he was affectionately known to his friends, was recalled to England where he underwent additional training in preparation for the invasion of France.
Cpl. Combs was with the first Allied forces landing on the Normandy coast on June 7 and serveral days later wrote his parents that “when I first knew that I was to take part in the invasion, I did not have much hope for the future. However, now that I have lived through all that has happened in the last few days, I have no fear at all and I know that I shall be back in the States to spend Christmas.”
Arthur was a graduate of Tennessee high school and was an employe of the Moore-Earhart company when he enlisted in the armed forces. He had been overseas 28 months at the time he was killed.
He is survived by his parents, two brothers, Sgt. Emmett Combs, U.S. Army Air Corps, Homestead, Fla., and Boyd D. Combs, S. 2-C, U.S. Navy, Sampson, N.Y., and one sister, Mrs. Thomas J. Copeland, Bristol. 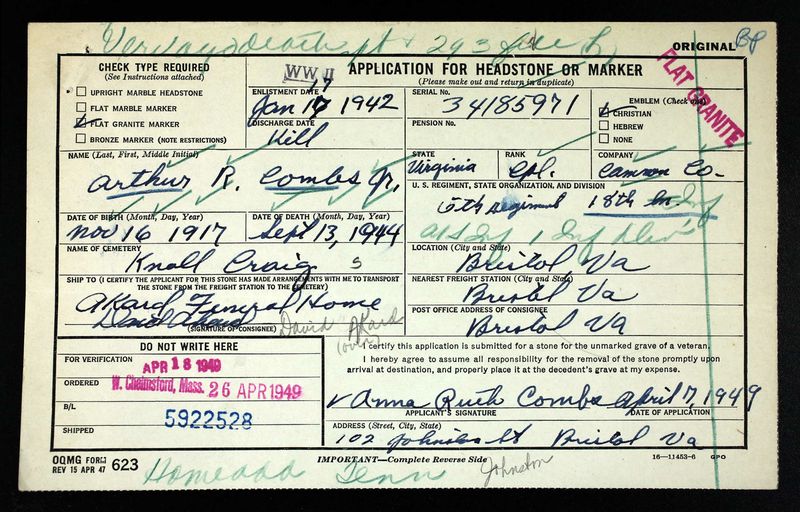 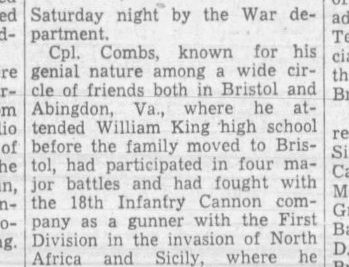 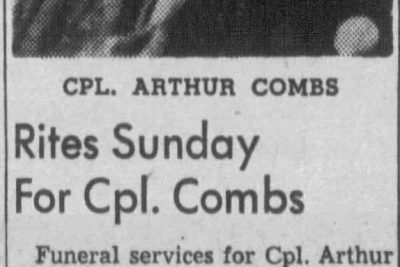