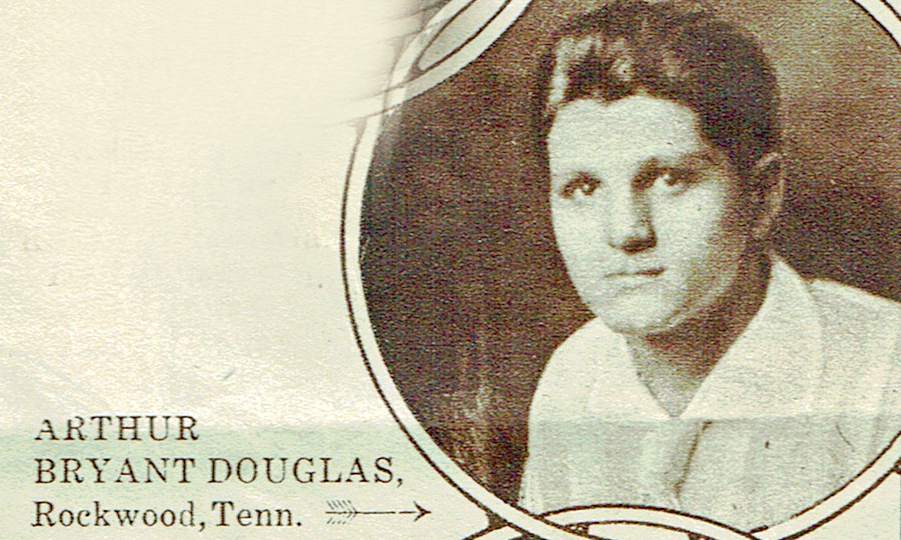 Is Killed In Action. Parents of Arthur DOUGLASS so Notified by War Department. Arthur DOUGLASS , an old Rockwood boy, who was some months ago reported as missing in action in France, has been officially reported as killed in action. The telegram bearing this news came to the young man’s parents here Tuesday, and is as follows: “Washington, Dec. 3, S.E. DOUGLASS, Rockwood, Tenn. Deeply regret to inform you that Private A.B. DOUGLASS, infantry, previously reported as missing in action since July 19, now reported as missing in action since July 19, now reported as killed in action about same date. Harris, Acting Adjt. Gen. Young DOUGLASS was a volunteer and was only about 18 years of age. He left Rockwood about fourteen months ago, going to Chattanooga. From there he went to Birmingham, where he enlisted. He wrote his parents that he had a fine position in Birmingham, but that he realized that his country needed him and that he intended to enlist. For a time after his enlistment he was in a hospital but shortly after being released was sent overseas. He saw active service and was in some of the thickest of the fighting. Along in the summer he was reported as missing in action, and since that time his parents have suffered a great deal of anxiety. It is stated that a resident of the mountain section received two weeks ago a letter from a relative in France and in this letter the writer stated that young DOUGLASS was killed, as he was close by his side when the shell which took his life exploded. However, the war department did not furnish the information until this week. The young man had many friends here who will be pained to learn of his death. The large municipal flag on Rockwood avenue hung at half-mast yesterday out of respect to the memory of the young soldier. The Rockwood Times, Rockwood, TN, Thursday, 5 Dec 1918, Vol. 38, No. 49. Missing In Action. Arthur DOUGLASS, Rockwood Boy, Not Heard of Since July 19. Arthur DOUGLASS, son of Mr. and Mrs. Sam DOUGLASS, who was well known to many people in Rockwood, is reported as missing in action in France since July 19th. Young DOUGLASS left Rockwood over a year ago, going to Chattanooga. From there he went to Birmingham, where he enlisted. “Missing in action” may mean several things. The soldier may be a prisoner, he may have been struck by a large shell and blown to pieces, or he may have become separated from his command. It some times takes several months to clear up the history of a soldier reported as missing in action. Frequently they are located in hospitals. The telegram to Mrs. DOUGLASS from the war department is as follows: No. 6 Og 36 Govt. WA Washington, D.C. 24. Mr. Sam E. DOUGLASS, Rockwood, Tenn. Deeply regret to inform you that Private Arthur DOUGLASS, infantry, is officially reported as missing in action since July nineteenth. Will report first information received. Harris The adjt. genl. 2:10 PM. Arthur DOUGLASS was 18 years of age and was a member of the Co. G, 26th U.S. Infantry. The Rockwood Times, Rockwood, TN, Thursday, 31 Oct 1918, Vol. 38, No. 44. Arthur DOUGLASS Reported As Still Missing By The Red Cross. Sam DOUGLASS this week received a letter from the Red Cross operating on the western battle front in which the information is given that no word has been received from his son, Arthur DOUGLASS, who is reported in the American casualty lists as missing in action. The letter to Mr. DOUGLASS is as follows: October 31, 1918. My Dear Mr. DOUGLASS: The American Red Cross sends most sincere sympathy to you in your anxiety, and wishes to assure you that when a man is officially reported missing, every avenue of information is used in order to trace him. This work is begun automatically by the Red Cross as soon as a man’s name appears on the list of missing. Men who were in the engagement with him are questioned, to find out if possible from eye witnesses what may have happened to him. Inquiries are made at the hospitals, and behind the German lines through the International Red Cross to see if he has been taken prisoner. Germany is extremely slow in giving out prisoner reports, and we must therefore, ask you to be as patient as possible in spite of your great anxiety, feeling that nothing is being left undone in order to obtain definite information of him, which will be forwarded to you immediately. Sincerely yours, W.R. SASTLE, Jr. Director. By L.B.C. The Rockwood Times, Rockwood, TN, Thursday, 7 Nov 1918, Vol. 38, No. 45. Another War Hero Laid To Rest Sunday. Arthur DOUGLASS Buried With Full Military Honors. All Rockwood paused last Sunday to pay tribute to another one of her boys, who made the supreme sacrifice on the battlefield of France, when the body of Arthur DOUGLAS was laid in its final resting place with full military honors by the local post of the American Legion. Private Arthur Bryant DOUGLAS was one of the youngest of Rockwood’s soldiers and his record is one of which even the oldest would well be proud to boast. He was a member of Co. G. 26th Infantry of the First Division, and also fought with the famous 42nd, (Rainbow) Division. With four other major engagements to his credit he went into his fifth and on the fifth day of the battle of Soissons was killed. He lacked one day of being in the service eight months. Arthur was born in Woodward, Ala. Nov. 25th, 1899, coming to Rockwood at the age of fifteen. He was employed by the Roane Iron Company here and was thought very highly of by both his employers and co-workers because of his willingness and faithfulness to his work. The funeral was held at the First Presbyterian Church, by Rev. J.C. ORR. Interment followed in the Odd Fellows cemetery. The Rockwood Times, Thursday, 9 Mar 1922, Vol. 42, No. 10. 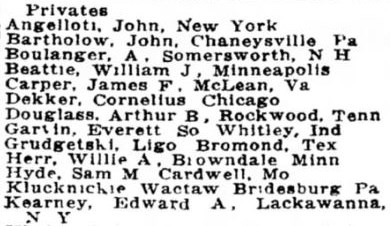 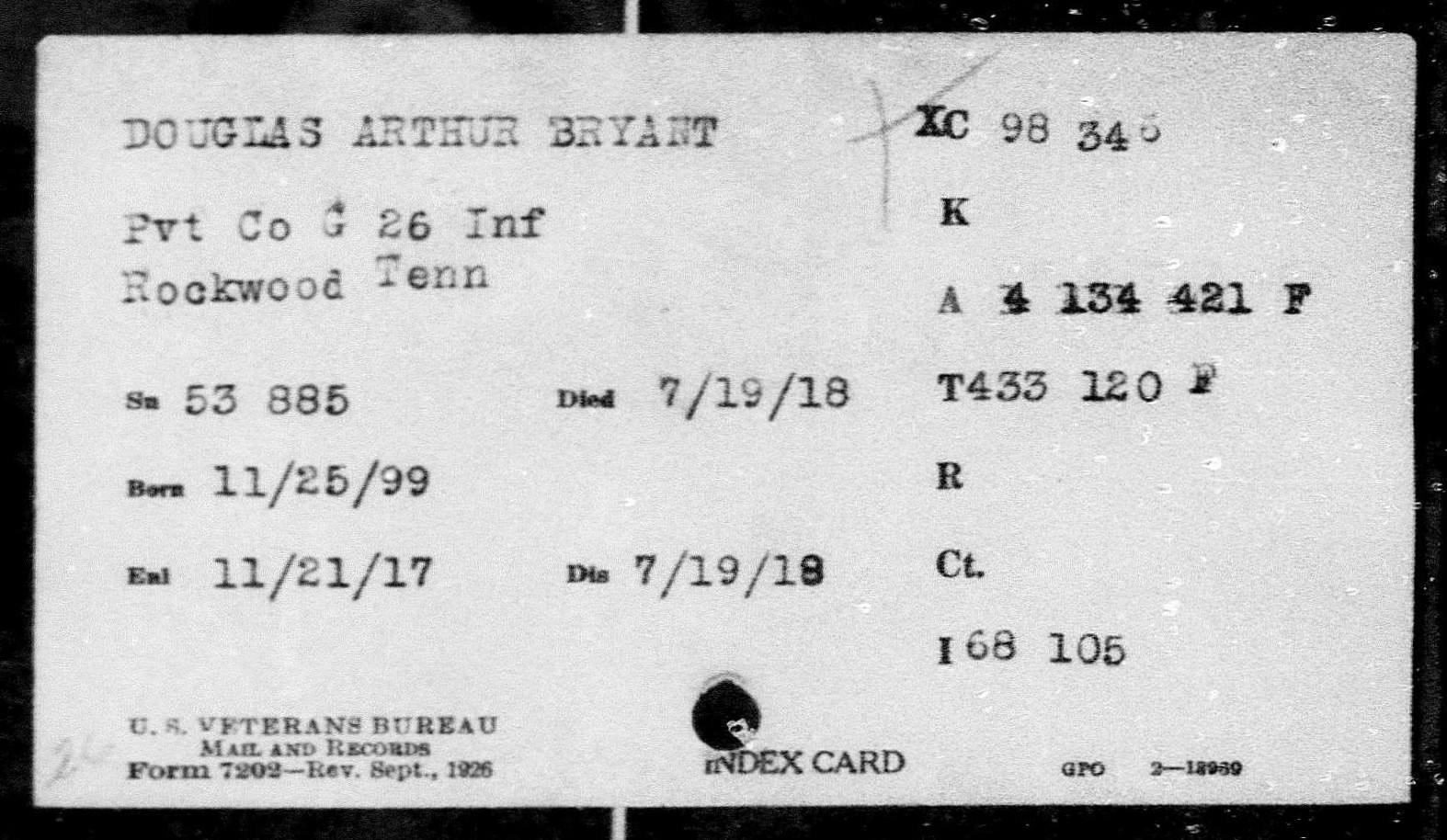