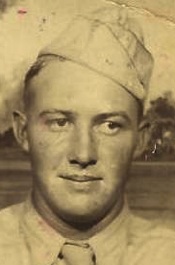 Archie Dalton is memorialized at the North Africa American Cemetery, Carthage, Tunisia and at the Epperson Cemetery, Monroe County, TN.

The Knoxville Journal, January 8, 1944
Mrs. Bessie L. Dalton of nearby Epperson, was notified by telegram recently from the Adjutant General of the War Department that her son, Cpl. Archie A. Dalton, of the Engineer Corps in North Africa, had been reported “missing in action since Nov. 26, 1943.” Corporal Dalton is 22 years old and had been in the army one year. The telegram was followed by a letter in which hope was given that Dalton was “a prisoner of war.” The lasst message the family had from him was dated Nov. 17, 1943 and he enclosed a $60 money order with which each member of the family could buy something. He instructed his mother to select a gift for his girl friend, Miss Dorothy Davis, as he was so situated he could not buy Gifts and sent them for Christmas. Mrs. Dalton and her husband, John Ervin Dalton, have two other sons in the service, Tech. Sgt. Enos Dalton, a tank driver, overseas, and Pvt. Cecil Dalton, a truck driver in the Air Corps, overseas. 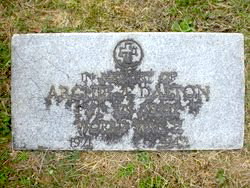 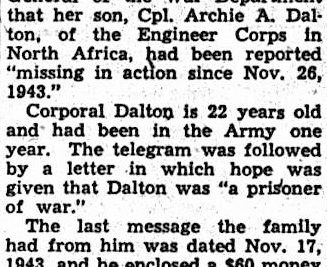