Private First Class
US Army
He enlisted on 7 June 1941 at Fort Oglethorpe in Georgia.

The Cleveland Herald, November 17, 1944
Mrs. Clemmie Carr, of McDonald, Tenn., received a wire from the War Department notifying her that her son, Pfc. A.J. Carr was killed in action on October 22, 1944. Pfc. Was a member of an infantry division. He entered the army in 1940, about a year before war was declared. His year would have been up about two months after Pearl Harbor. Besides his mother, he is survived by three brothers, Don Carr of Spring City; Robert and Arlie Carr, both of McDonald; and three sisters, Mrs. Claudie Gates, Mrs. Lozier Goins and Mrs. Maine Myers, all of McDonald. 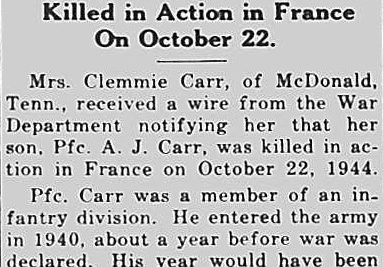