Seaman 2nd Class, Anderson Franklin Brown Jr. #7836663, United States Naval Reserve, was married to Mrs. Virginia Bailey Brown, the daughter of Dora Brown of Kingston Tennessee. He was shipped aboard the USS Hoel DD-533. In October 1944 the Hoel was part of the fleet supporting Gen MacArthur’s invasion force at Leyte in the Philippine Islands. The Japanese Navy attempted to stop the invasion with a three-prong attack against the US Navy. The Japanese Center Force that was to attack the landing area was seen to retreat and the major units of the US Fleet were in pursuit of the other two Japanese Fleets. The reappearance of the Japanese force at dawn was totally unexpected. In the encounter the Hoel was sunk as she protected the light carriers.Seaman Brown was killed in action in the Battle off Samar Island, Leyte Gulf on 25 October 1944. He is memorialized on the Tablets of the Missing at Manila American Cemetery, the Philippines.Awards include Purple Heart, Navy Presidential Unit Citation, Navy Good Conduct Medal, Asiatic-Pacific Campaign Medal, and Philippines Presidential Unit Citation.The Dictionary of American Fighting ships described the Hoel’s last battle:After replenishing at Seeadler Harbor of Manus, Admiralty Islands, Hoel cleared that base with a fire support group 12 October 1944 to join Rear Admiral Thomas L. Sprague’s escort carrier group (Task Group 77.4) in invading the Philippines. Sprague’s force was composed of three units, each comprising a group of escort carriers and a screen of destroyers and destroyer escorts. These units, known by their radio calls as the “Three Taffys”, began operating off Samar 18 October 1944 to cover the landings on Leyte. Hoel was attached to “Taffy 3” (Escort Carrier Task Unit 77.4.3) commanded by Rear Admiral Clifton A. F. Sprague and comprising four escort carriers guarded by destroyers Hoel, Heermann, and Johnston. Before the decisive battle off Samar, “Taffy 3” was reinforced by the arrival of Admiral R. A. Oftsie with two more escort carriers and four destroyer escorts, Dennis, John C. Butler, Raymond, and Samuel B. Roberts.Dawn of 25 October 1944 found “Taffy 3” steaming northeast of Samar operating as the Northern Air Support Group. “Taffy 2” was in the central position patrolling off the entrance to Leyte Gulf, and “Taffy 1” covered the southern approaches to the Gulf some 130 miles to the southeast of Hoel’s “Taffy 3”. Admiral T. L. Sprague was under the erroneous impression that Admiral Halsey’s 3d Fleet was providing protection to the north and so was taken by surprise when at 0645 “Taffy 3’s” lookouts observed antiaircraft fire to the northward and within 3 minutes were under heavy fire from Kurita’s powerful Center Force of 4 battleships, 6 heavy cruisers, 2 light cruisers, and 11 destroyers.The only chance for survival of the little group of American “jeep” carriers and “tin cans” lay in fleeing to the south hoping that aid would arrive before their complete destruction. While the carriers launched all available planes to attack their numerous Japanese adversaries and then formed a rough circle as they turned toward Leyte Gulf, Hoel and her fellow destroyers Johnston and Heermann, worked feverishly to lay down a smoke screen to hide their “baby flattops” from the overwhelmingly superior enemy ships. At 0706, when a providential rain squall helped to hide his carriers, Admiral Clifton Sprague boldly ordered his destroyers to attack the Japanese with torpedoes. Hoel instantly obeyed this order by heading straight for the nearest enemy battleship, Kongo, then 18,000 yards away. When she had closed to 14,000 yards she opened fire as she continued her race toward the smoking muzzles of Kongo’s 14-inch guns. A hit on her bridge which knocked out all voice radio communication did not deflect her from her course toward the enemy until she had launched a half salvo of torpedoes at a range of 9,000.Although Hoel’s “fish” all failed to strike their target, they caused Kongo to lose ground in her pursuit of the carriers by forcing her to turn sharply left and to continue to move away from her quarry until they had run their course. Minutes later Hoel suffered hits which knocked out three of her guns, stopped her port engine, and deprived her of her Mark-37 fire control director, FD radar, and bridge steering control. Undaunted, Hoel turned to engage the enemy column of heavy cruisers. When she had closed to within 6,000 yards of the leading cruiser, Haguro, the fearless destroyer launched a half-salvo of torpedoes which ran “hot, straight and normal.” This time she was rewarded by the sight of large columns of water which rose from her target. Although Japanese records deny that these torpedoes hit the cruiser, there is no evidence to indicate any other explanation for the geyser effect observed.Hoel now found herself crippled and surrounded by enemies. Kongo was only 8,000 yards off her port beam and the heavy cruiser column was some 7,000 yards off her port quarter. During the next hour the valiant ship rendered her final service by drawing enemy fire to herself and away from the carriers. In the process of fish-tailing and chasing salvos she demanded the attention of her antagonists by peppering them with her two remaining guns. Finally at 0830, after withstanding over 40 hits, an 8-inch shell stilled her remaining engine. With her engine room under water, her No. 1 magazine ablaze, and the ship listing heavily to port and settling by the stern, Hoel’s stouthearted captain, Commander Leon S. Kinterberger, reluctantly ordered his crew to “prepare to abandon ship.” The Japanese fire at the doomed ship continued as her surviving officers and men went over the side and only stopped at 0855 when Hoel rolled over and sank in 4,000 fathoms.Only 86 of Hoel’s complement survived while 253 officers and men died with their ship. Commander Kinterberger described the incomparably courageous devotion to duty of the men of the Hoel in a seaman’s epitaph to the action: “Fully cognizant of the inevitable result of engaging such vastly superior forces, these men performed their assigned duties coolly and efficiently until their ship was shot from under them.” 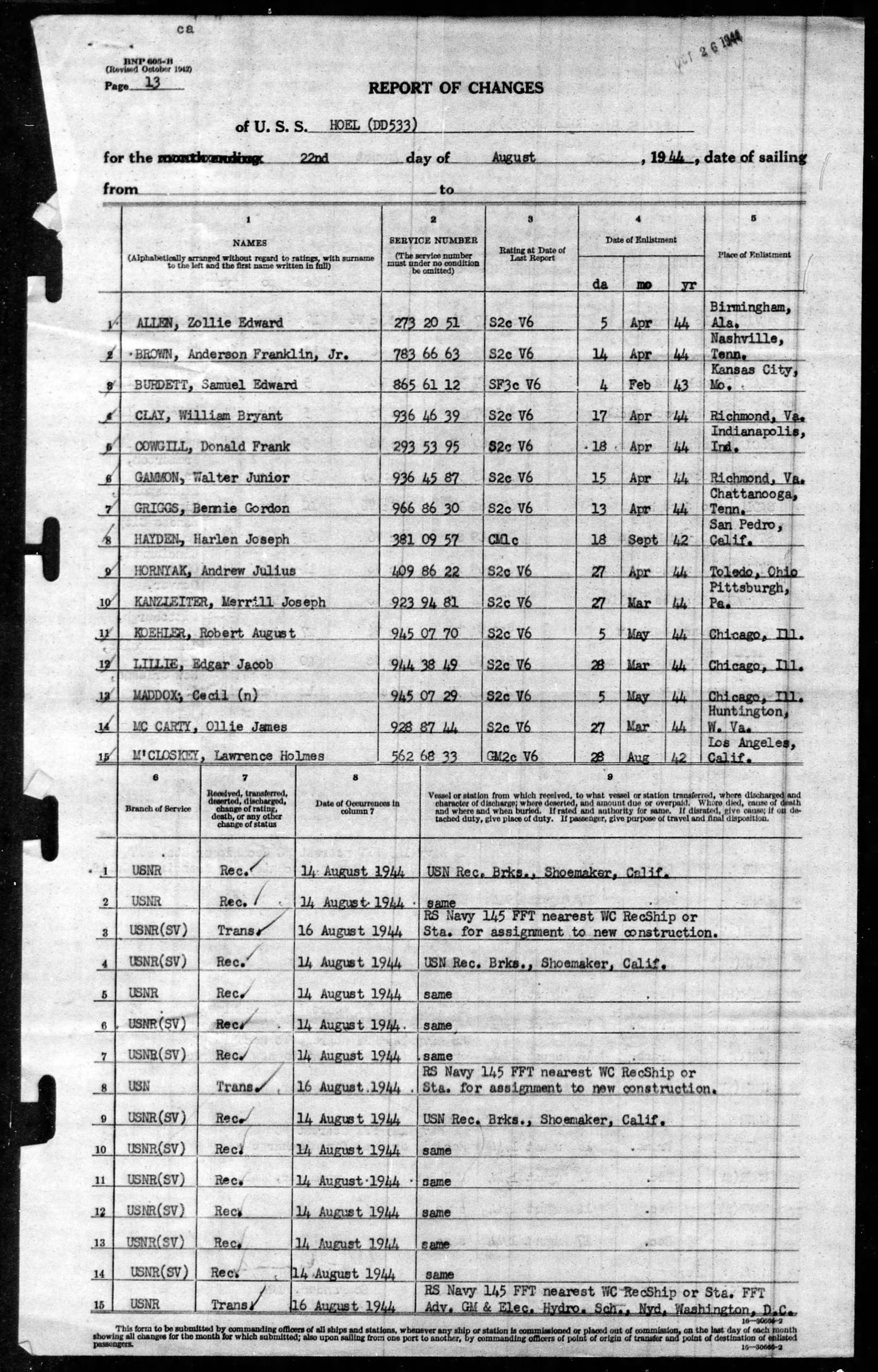