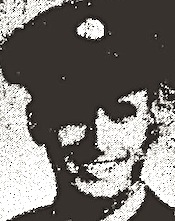 The Kingsport Times 6 May 1942
Kingsport Youth promoted in Army
Fort McClellan, Ala. – Private Alonzo Ledbetter of Kingsport has been named squad leader in second Platoon, Company B, 15th Branch Immaterial Replacement Center, according to an announcement by replacement center headquarters.
Son of Mr. and Mrs. W.E. Ledbetter, Private Ledbetter was a clerk in the Post Office before his induction into the army. He is stationed here to receive eight weeks basic training and is now an acting Corporal.

The Kingsport Times, 15 October 1944
Purple Heart to Alonzo Ledbetter
Mr. and Mrs. W.E. Ledbetter, Route 4, have received the Purple Heart which was awarded to their son, S/Sgt Alonzo Ledbetter, given for military merit and wounds received in action August 5 in France. He has been overseas since June, 1944.
Sergeant Ledbetter is a brother of Cpl John H. Ledbetter, who has been serving with the Air Force in England, and France since September, 1942. Pvt Ben H. Ledbetter who has been serving with the L.R.T.C. in Italy since July, 1944 is another brother.
Before going overseas Sergeant Ledbetter trained at Fort McClellan, Ala., and was at the replacement center at Fort Meade, Md., for a year.

The Kingsport Times 15 December 1947.
Funeral Rites for S/Sgt Ledbetter
The body of S/Sgt Alonzo Ledbetter will arrive in Kingsport at 2:35 p.m. Tuesday, escorted by T/Sgt Thomas B. Adlich of the Charlotte Quartermaster Depot.
Sgt Ledbetter was killed in action in Luxembourg, December 12, 1944, where he was a Platoon Sergeant of the 329th Infantry Regiment of the Third Army. Prior to entering the service in March 1942, he was a clerk at the Kingsport Post Office.
Sgt Ledbetter received his training at Fort McClellan, Alabama and Fort Mead, Maryland and went overseas in June, 1944. He was born at the present home of his parents in Glen Alpine Community.
He attended school at Sullivan High and was graduated from Dobyns-Bennet High School, after which he was employed at Tennessee Eastman Corporation for eight years, before going to the post office to work.
Surviving are his parents, Mr. and Mrs. W.E. Ledbetter; five brothers, Early Veston, Route 5, Kingsport; Rufus Kelly, Route 4; Benjamin Harrison, Route 5; John Huston, Route 4 and the Rev. J.L. Ledbetter of Crossville, Tenn.: three sisters, Mrs. Ollie Hood, Route 4; Mrs. Sallie Richardson, Route 5, and Mrs. Blanche Roland of Ford-town.
The body will remain at the Hamlett-Dobson Chapel Tuesday night and will be taken to the home on Wednesday. Funeral services will be held at Sullivan High Baptist Church and burial will be in the City Cemetery. 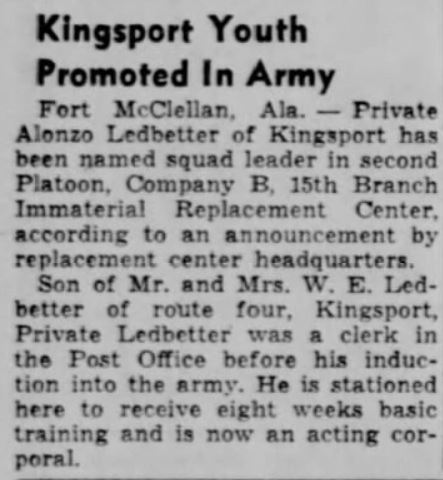 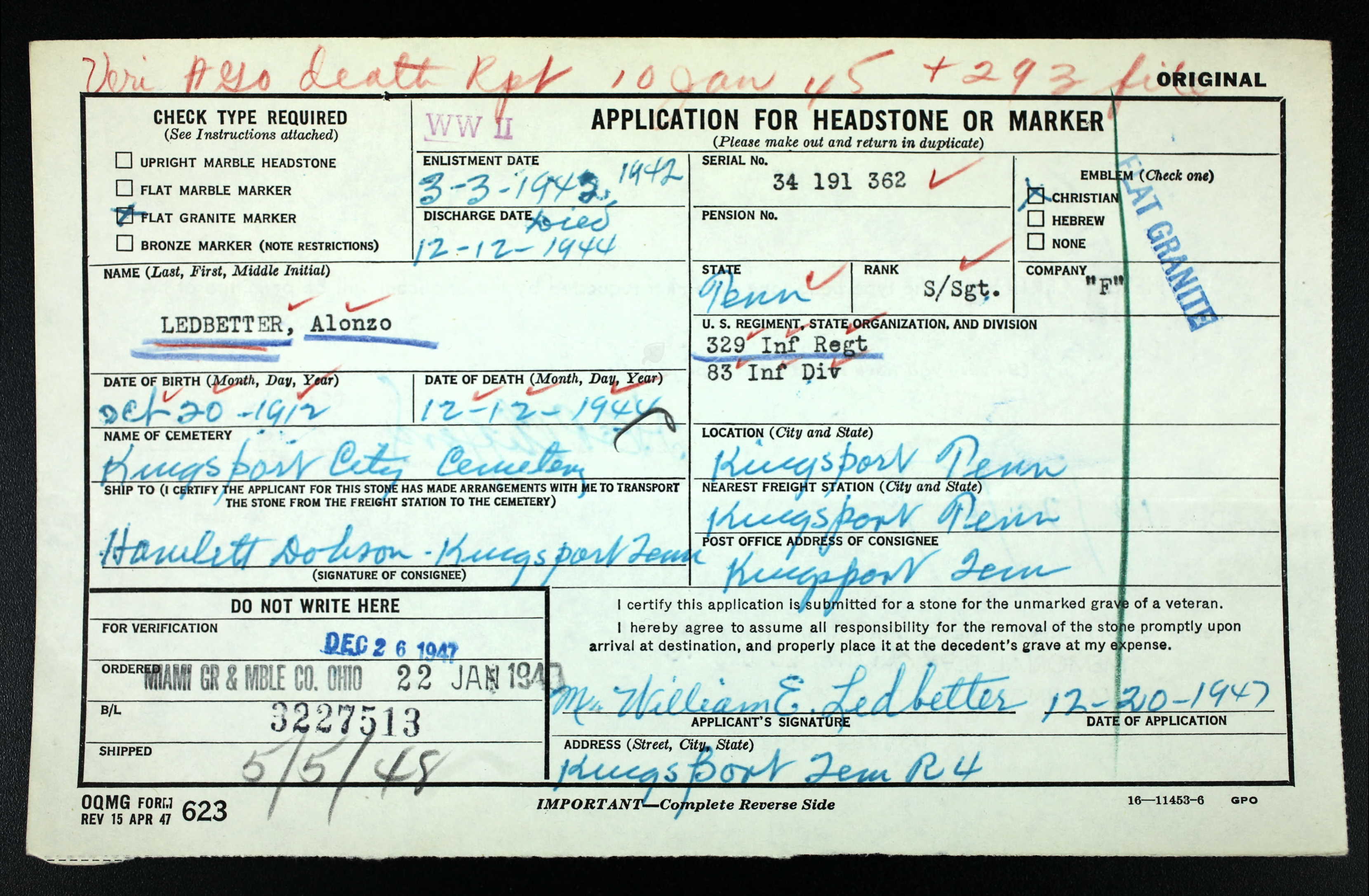