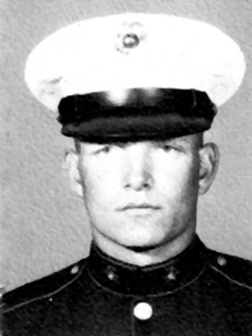 Private First Class Allan Ladd Elmore was born on June 13, 1946, and was originally from Hollywood, California. He served his country in the Vietnam War in the United States Marine Corps, as a rifleman in L Company, 3rd Battalion, 7th Marines, 1st Marine Division. On March 21, 1966, PFC Elmore was killed while under hostile conditions in Quang Ngai province, South Vietnam; he was 19 years old at the time of his death. PFC Elmore is memorialized on the Vietnam Veterans Memorial on Panel 6E, Line 30.

Allan, the son of Benjamin H.Elmore and Ruth Elmore, of Twenty-Nine Palms, CA, enlisted in the US Marine Corps on August 9, 1965 in Los Angeles CA. He was assigned to and serving with Company L, 3d Battalion, 7th Marines, 3d Marine Division(Rein) FMF.

On operation TEXAS at approximately 15:00 Company L in conjunction with Company K began a search and destroy operation southeast of their positions towards the hamlet of Trach An Noi when the left flank of Company L came under intense small arms fire from an enemy force, four of whom were killed by the Marines during the contact.

As the Marines continued to move forward to their objective they encountered continuing heavy machine-gun and small arms fire from a well-entrenched and disciplined enemy force with six Marines being killed in action and a number being wounded as they attacked the heavily fortified enemy positions. PFC Elmore was one of the casualties; he was killed in action as a result of an enemy gunshot wound.