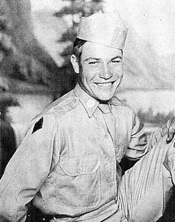 Sergeant Whitson was a member of Company F, 2nd Battalion, 9th Infantry Regiment, 2nd Infantry Division. He was seriously wounded by the enemy in South Korea on August 31, 1950 and returned to duty on September 27, 1950. He was listed as Missing in Action while fighting the enemy in North Korea on November 26, 1950. He was presumed dead on December 31, 1953. His remains were not recovered. His name is inscribed on the Courts of the Missing at the Honolulu Memorial.

The Johnson City Press-Chronicle, January 13, 1954
Sgt. First Class Alfred Whitson, son of Mr. and Mrs. D.W. Whitson of 719 East Maple, has been declared dead by the Army, according to a message received by the parents from the Defense Department. The message stated that Whitson was declared dead December 31, 1953. He had been reported missing in action since November 26, 1950. Whitson, only 18 years of age at the time he was reported missing, entered service in February 1948, at the age of 16.
Survivors include the parents, six sisters, Mrs. F.C. Norris, Mrs. Burean Hicks, Lucille, Beulah, Phillys and Joann Whitson; and six brothers, Lester, David, Willard, James, Billy and Odell Whitson, all of Johnson City. 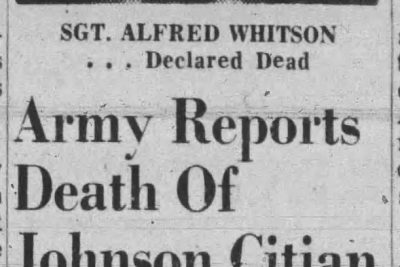