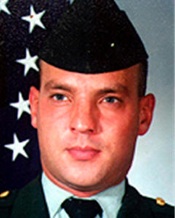 Staff Sergeant Alfred Barton Siler was killed in action on May 25, 2005, when the Humvee he was riding in swerved to avoid a person and hit another vehicle in Tuz, Iraq. He was the turret gunner on the Humvee and lost his life when the Humvee flipped over during the accident. SSgt Siler was from Eagan, Tennessee, and was a 1989 graduate of Jellico High School. He was an eight-year veteran of the Army National Guard, Troop A Support Squadron, 278th Regimental Combat Team stationed in Knoxville. He was scheduled to return home within a month and look forward to being with his family and friends.

Alfred Bart Siler had already bought tickets to take his 3-year-old daughter, Mikkah, to Disney World over the summer. He couldn’t wait to get home and hold his little girl. He was going to take her to the beach, and they were going to go fishing and just hang out, said his brother, Jason. He couldn’t wait to have some biscuits and gravy and have him a cold beer.

Siler, 33, of Duff, Tenn., died May 25 in a vehicle accident in Tuz. The National Guardsman was based in Knoxville, Tenn. Siler joined the military a few years after graduating from high school in 1989 and was a welder in civilian life. He enjoyed four-wheeling and outdoor activities. Most pictures of Siler in Iraq show him surrounded by children and holding stuffed animals for them. The conditions children lived in there sometimes brought him to tears, said Capt. Rhonda Jones. He was a man of little words but probably had the biggest heart of anybody I’ve ever met, Jones said. Command Sgt. Maj. Prather said Siler always talked about his daughter. She was the joy in his life, he said. -Associated Press

Sgt. Siler was returned home to Tennessee and funeral services were held at the LaFollette Church of God and buried following the service at Marlow Cemetery in Caryville, Tennessee. In June of 2006, the Tennessee Army National Guard Armory in Jacksboro was named in honor of Sergeant Barton Siler.

From The Knoxville News Sentinel June 5, 2005:
LAFOLLETTE, Tenn. — It was all there for Sgt. Alfred Barton Siler, 33, of the 278th Regimental Combat Team. Just as it should be for any good soldier who died in the service of his country. A flag at half-staff, with black mourning streamers attached, blew in a soft breeze Saturday in front of LaFollette Church of God, where his funeral was held.

The long procession that followed to Marlow’s Cemetery was greeted by many people, some of them strangers, who held flags and signs of support along the route.

May God Bless the Family of This Brave Soldier one of those signs said.

The burial with full military honors. Amazing Grace from a bagpiper. Cracks from three volleys of shots from M-16 rifles echoing through the peaceful countryside around the cemetery.

And the folded flag presented to a deeply saddened family.

There was all of that, yes, but there was more for Siler, who was killed May 25 in Iraq when the Humvee he was riding in collided with another vehicle, after it swerved to avoid hitting a civilian vehicle, according to military authorities.

There were countless memories of him, held and shared by his family and many friends, memories now made sweeter and more precious by his untimely passing.

During the funeral service, fellow soldiers remembered him as a man who did his duty without complaint and who often volunteered because he realized that freedom is not free.

But Siler, an 11-year veteran of the Tennessee National Guard, was much more than a soldier. Those who knew him remembered him Saturday as a friendly, kind and caring man who loved children and was devoted to his daughter, Mikkah. He was due to come home on leave soon and had planned a beach trip with her.

He is going to be missed by the whole family, his sister, Shomi Siler, said on Friday. And his little girl is going to have to grow up without her daddy, because he died taking care of children in another country.

After Saturday’s funeral, Joyce Walker, who watched Siler grow up with her daughter and son-in-law, said the young Siler grew into the kind of man you can look up to.

A memory book outside the funeral service contained many testaments to his nature and character.

His smile and kindness, I will never forget, wrote Michelle Leach Remmek.

Tracey Prater described him in his days at Jellico High School as kind, giving and caring. He was the peacemaker.

Siler was the second soldier from Campbell County to die in Iraq. Last year, Sgt. Gregory Hicks of Duff died in a helicopter crash.

Once more, a war far away from us is at our front door, state Sen. Tommy Kilby, D-Wartburg, said. We all appreciate his service to his country. No words can be spoken to bring comfort to the family. We can just let them know that we are thinking of them and praying for them.

At the conclusion of the burial service, dozens of helium-filled balloons, each filled with a personal message written by a friend or family member, were released.

Clutching the flag from her brother’s coffin, Shomi Siler’s eyes strained into the blue sky, following those balloons. Everyone else did the same.

They were not just watching the balloons, though. They were remembering a good man whose time on Earth was far too short.

And just maybe, they were seeing him, too.

On May 19, 2006 Tennessee Governor Phil Bredesen signed a bill from the Tennessee Legislature honoring the memory of Staff Sergeant Alfred Barton Siler of Duff, with a memorial bridge located on State Route 840 in Williamson County, Tennessee. State Route 840 was designated in the Public Acts of 2005 as the Tennessee National Guard Parkway and has several intersections and bridges dedicated to the memory of fallen Tennessee National Guardsmen. The Staff Sergeant Alfred Barton Siler Memorial Bridge was dedicated September 28, 2007 and is located on State Road 840 at the Campbell Road Overpass in Williamson County.