The LaFollette Press:
The body of Major George W. Alexander, 32, of Speedwell, who was killed in the mysterious mass jet-plane crash near Richmond, Ind. Saturday, arrived in LaFollette Wednesday morning and was taken to the home of his mother, Mrs. W. Hayes Alexander, in Speedwell pending the final rites. Funeral services were conducted from his mother’s home on Thursday, Rev. C.H. Loudy, pastor of the Mountain View Methodist Church officiating. Major Alexander held his membership in the Mountain View Church. Burial was in Alexander cemetery at Speedwell.
Major Alexander was the son of the late William H. Alexander and Mrs. Alexander. His father was a rural-mail carrier at Speeldwell for some thirty years, but had retired and lived on his Speedwell farm until his death some years ago. The Major was a nephew of Mrs. Jesse L. Rogers of LaFollette. A host of relatives and friends, shocked by the tragedy of the young major’s death, were present for the funeral in expression of their grief and sympathy with the bereaved family. Major Alexander’s tragic death brought a sudden close to a distinguished career as a military pilot, including service throughout World War II as a combat pilot and a stretch of service as a pilot of planes carrying men and material “over the hump” into China. The Major was stationed at Bergstrom Air Force Base, Austin, Texas and was on a jet-plane flight involving 71 of the poweful new planes enroute to Selfridge Field at Mt. Clemens, Michigan, when his plane was one of eight which suddenly seemed to flounder and crashed to earth amid lighting flashes in stormy skies. Three of the eight pilots, including Major Alexander, were killed. Air Force officials are baffled in their efforts to explain the mysterious simultaneous crashes and are maintaining a strict silence as to any detailed explanation pending completion of their extensive investigation of the affair.
Major Alexander is survived by his wife, Mrs. Doris L. Alexander, a five-year-old daughter, Barbara Jean, and a three-year-old son, John Hayes, all of Austin, Texas; his mother; three brothers, Albert and David of Speedwell and William Hayes now in the army, stationed at Fort Worden, Wash.; and two sisters, Alice and Harvalou, both of Speedwell. 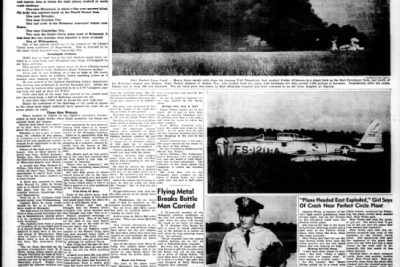