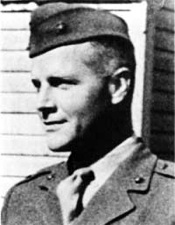 For conspicuous gallantry and intrepidity at the risk of his life above and beyond the call of duty as Executive Officer of the 2nd Battalion Shore Party, 8th Marines, 2d Marine Division, during the assault against enemy Japanese-held Tarawa in the Gilbert Islands, 20-22 November 1943.

Acting on his own initiative when assault troops were pinned down at the far end of Betio Pier by the overwhelming fire of Japanese shore batteries, 1st Lt. Bonnyman repeatedly defied the blasting fury of the enemy bombardment to organize and lead the besieged men over the long, open pier to the beach and then, voluntarily obtaining flame throwers and demolitions, organized his pioneer shore party into assault demolitionists and directed the blowing of several hostile installations before the close of D-day.

Determined to effect an opening in the enemy’s strongly organized defense line the following day, he voluntarily crawled approximately 40 yards forward of our lines and placed demolitions in the entrance of a large Japanese emplacement as the initial move in his planned attack against the heavily garrisoned, bombproof installation which was stubbornly resisting despite the destruction early in the action of a large number of Japanese who had been inflicting heavy casualties on our forces and holding up our advance.

Withdrawing only to replenish his ammunition, he led his men in a renewed assault, fearlessly exposing himself to the merciless slash of hostile fire as he stormed the formidable bastion, directed the placement of demolition charges in both entrances and seized the top of the bombproof position, flushing more than 100 of the enemy who were instantly cut down, and effecting the annihilation of approximately 150 troops inside the emplacement. Assailed by additional Japanese after he had gained his objective, he made a heroic stand on the edge of the structure, defending his strategic position with indomitable determination in the face of the desperate charge and killing 3 of the enemy before he fell, mortally wounded.

By his dauntless fighting spirit, unrelenting aggressiveness and forceful leadership throughout 3 days of unremitting, violent battle, 1st Lt. Bonnyman had inspired his men to heroic effort, enabling them to beat off the counterattack and break the back of hostile resistance in that sector for an immediate gain of 400 yards with no further casualties to our forces in this zone. He gallantly gave his life for his country.”

Some photographs below were provided by the Knoxville News Sentinel and WBIR in Knoxville, TN.

Alexander “Sandy” Bonnyman Jr. had grown up in Knoxville before serving in the Marine Corps during World War II and receiving the Medal of Honor posthumously for heroism on the island of Tarawa in 1943.

Later this year, he will finally receive a hero’s welcome, too, when his recently found body is returned to Knoxville for burial.

Clay Bonnyman Evans of Colorado, the Marine’s grandson, confirmed over the telephone Monday that he and a team of researchers from History Flight had found Bonnyman’s remains in a grave with a few dozen other Marines in late May.

“It was amazing,” said Evans, who was serving as a volunteer with the non-profit group that works with the Defense POW/MIA Accounting Agency to recover remains of missing military personnel.

“I didn’t count on this happening. When it did, I was shocked. I dropped my video camera and had tears in my eyes.”

He said researchers were able to identify his grandfather’s body through dental records that revealed his distinctive dental work. A cigarette lighter and a piece of metal that Evans is hoping is his grandfather’s dog tag were also recovered.

DNA verification is also being done, he said.

First Lt. Bonnyman had grown up in Knoxville as the son of Alex Bonnyman Sr., who was the chairman of the Blue Diamond Coal Co. and built a home designed by Charles Barber on Kingston Pike just west of the University of Tennessee campus.

After attending J.A. Thackston School in Knoxville and later boarding high school in New Jersey, the younger Bonnyman played on the football team at Princeton University.

He was briefly in the Army Air Corps in the early 1930s as a flying cadet, but later married, had three daughters and bought a copper mine in New Mexico before entering military service in World War II in the Marines.

According to his Medal of Honor citation, Bonnyman, a combat engineer, was on the South Pacific atoll of Tarawa in November 1943 when he led his demolition team on an assault on a Japanese bomb shelter.

He was eventually able to reach the top of the shelter and help flush out several of the enemy. As the Japanese began to fight back, Bonnyman remained in a forward position and was eventually killed, but not before he killed several Japanese troops, his citation said.

For his actions, he was posthumously awarded the Medal of Honor in 1947 by the secretary of the Navy, and his 12-year-old daughter, Frances, accepted the award for the family.

Evans added that his grandfather is scheduled to be brought to Knoxville for burial in the family plot at Highland Memorial Park near Kingston Pike in Bearden, probably in September.

“I think it is going to be a big deal,” Evans said, adding that he has been in preliminary discussions with the U.S. Marines.

A hero’s farewell: Bonnyman laid to rest in Knoxville

Former Knoxville resident Alexander “Sandy” Bonnyman Jr. reached great heights as a successful businessman before also distinguishing himself on the battlefield as a posthumous recipient of the Medal of Honor during World War II.

On Sunday afternoon, the Marine scaled the hilltop one last time, as his remains were laid to rest in a family plot at one of the highest points at Berry Highland Memorial Cemetery in West Knoxville.

Some 200-300 people plus a Marine honor unit and band were on hand for the unique burial service, which was nearly 72 years after the first lieutenant died leading an assault on a Japanese bomb shelter on the Pacific atoll of Tarawa.

Marines and civilians, the young and old, and family members and strangers gathered to pay respects during the brief ceremony of mostly liturgical prayers on the sun-splashed day.

“It doesn’t matter what generation they serve, they are a brother and you’ve got to come out and support them,” said Josh Burnett, who served in the Marines from 2000-04. “They are family.”

Donna Buswell said after the service that she also felt a pull to come and salute him. “This is a once-in-a-lifetime event, so I had to see it,” she said. “It was beautiful.”

Bonnyman, who grew up in Knoxville as the son of a coal company president and lived for a number of years in the family home where the Tennessee Valley Unitarian Universalist Church is now, had been hurriedly buried at Tarawa in 1943.

Earlier this year, his remains were found by the nonprofit History Flight group of Florida, and plans were made to bring his body back to Knoxville for burial next to his parents.

The formal service included a procession led by a Civil War-style caisson wagon operated by Burroughs Battery of Blaine in Grainger County, a missing man formation flyover, a 21-gun salute, the playing of “Taps” and a Marine band musical salute.

Bonnyman’s grandson, Clay Bonnyman Evans, who has researched his grandfather’s life and was at Tarawa when his remains were found, said the soldier’s parents, Alexander and Frances Bonnyman, would have felt peace Sunday.

“It broke their hearts when he died, and as a small measure, they wanted to get him back to Knoxville,” he said during a reception for family and friends at Berry Highland Memorial Funeral Home off Kingston Pike after the burial.

Also on hand were two of Bonnyman’s daughters, Fran Evans and Alexandra Prejean.

Prejean, now living in Hawaii and only 2 when her father died, said she had been to Tarawa and called it a beautiful place. But she felt Knoxville is where he should be buried.

“He’s home in Knoxville,” she said at the reception.

Her older sister was 9 years old when her father died and remembers the family living in Santa Fe, N.M., while he operated a copper mine after leaving Knoxville. She recalled that they would go to church in Santa Fe and go to a local pharmacy afterward for lunch, and it was there that he heard the news about the attack on Pearl Harbor.

“He was very distressed and agitated,” she said. “It was very, very memorable.”

Although he did not have to serve due to his work with the copper mine, Bonnyman soon enlisted and eventually met his unfortunate death in the Pacific. Fran Evans accepted her father’s Medal of Honor in 1947 from Secretary of Navy/Defense James Forrestal and said Sunday that she still has vivid memories of the long train ride from New Mexico to Washington, D.C., and the ceremony.

Bonnyman’s nephew, Robert McKeon, who led the liturgies along with Anne Bonnyman, another relative, recalled after the service that the noted Marine had a very likable manner.

“He was a very pleasant guy,” he said. “He was so good he could sell coal to a coal mine. He had a great personality and a leadership quality that all of us looked up to.” 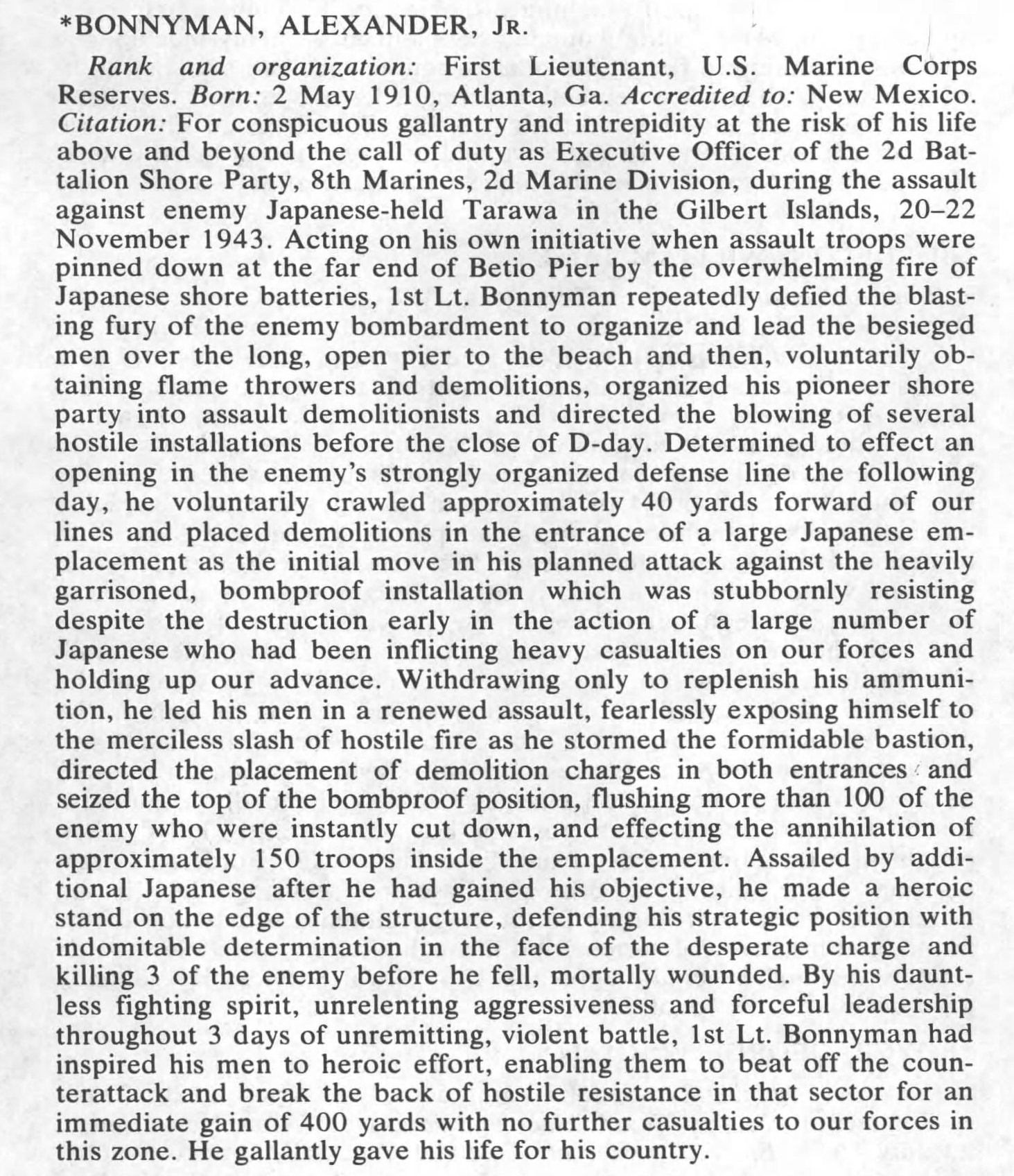 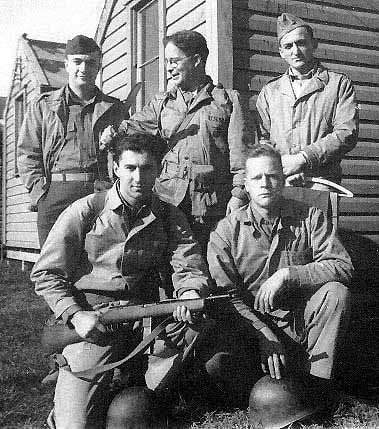 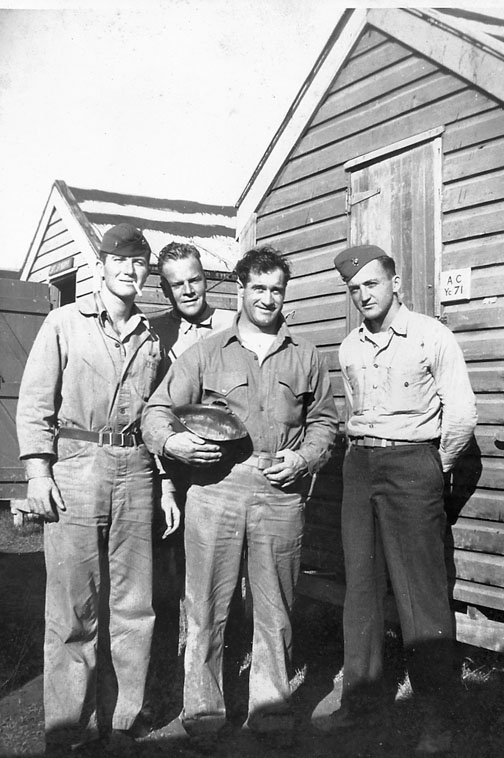 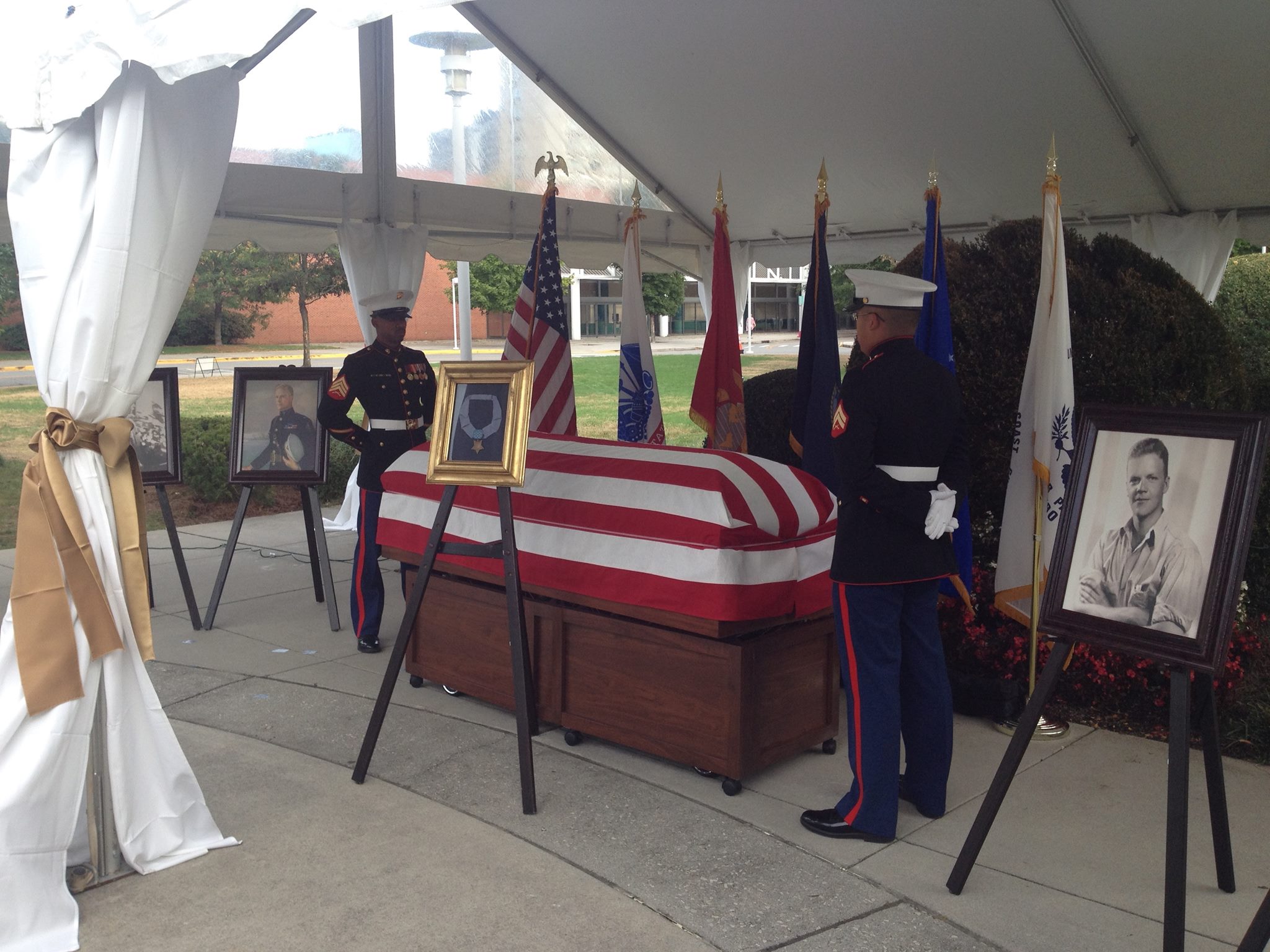 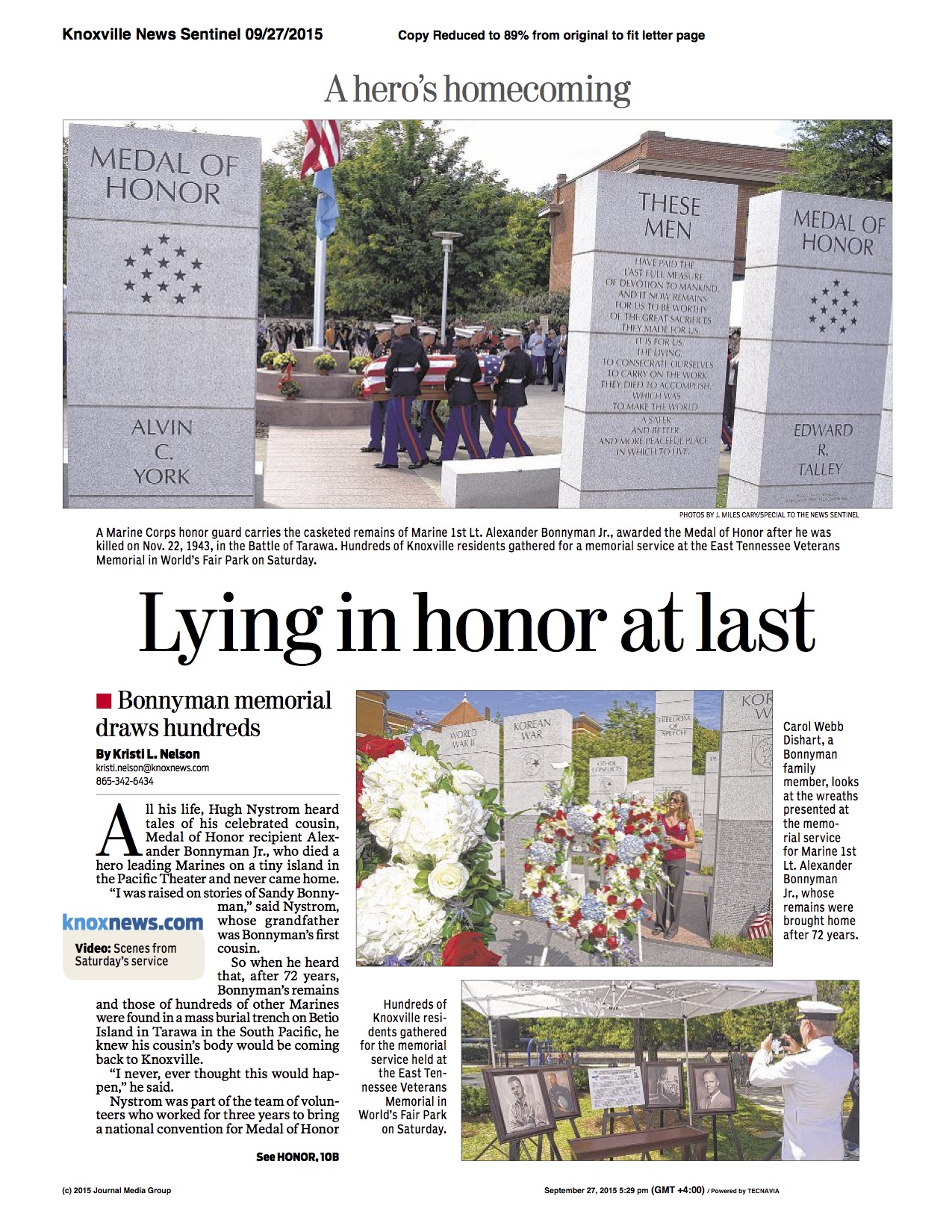 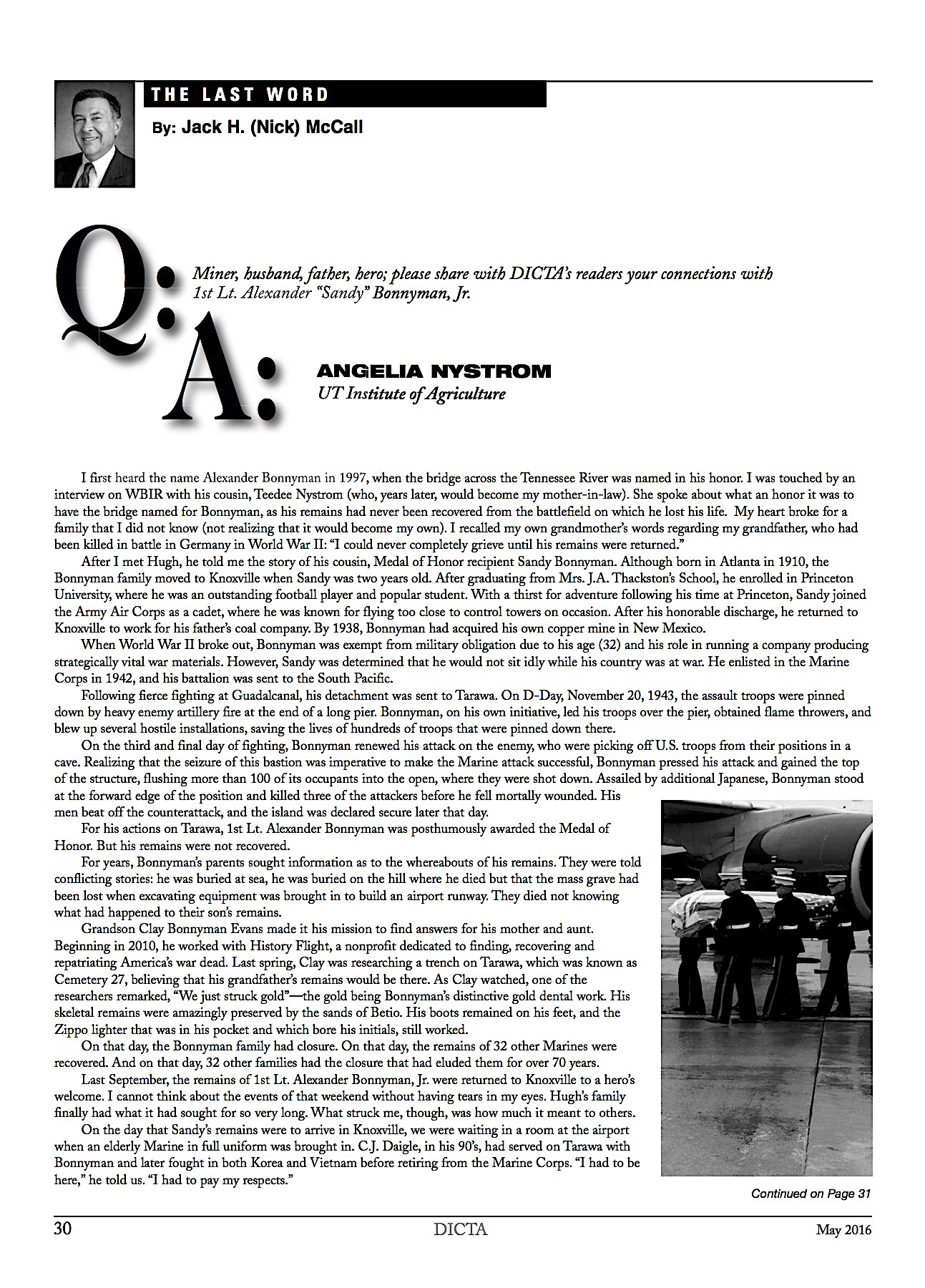 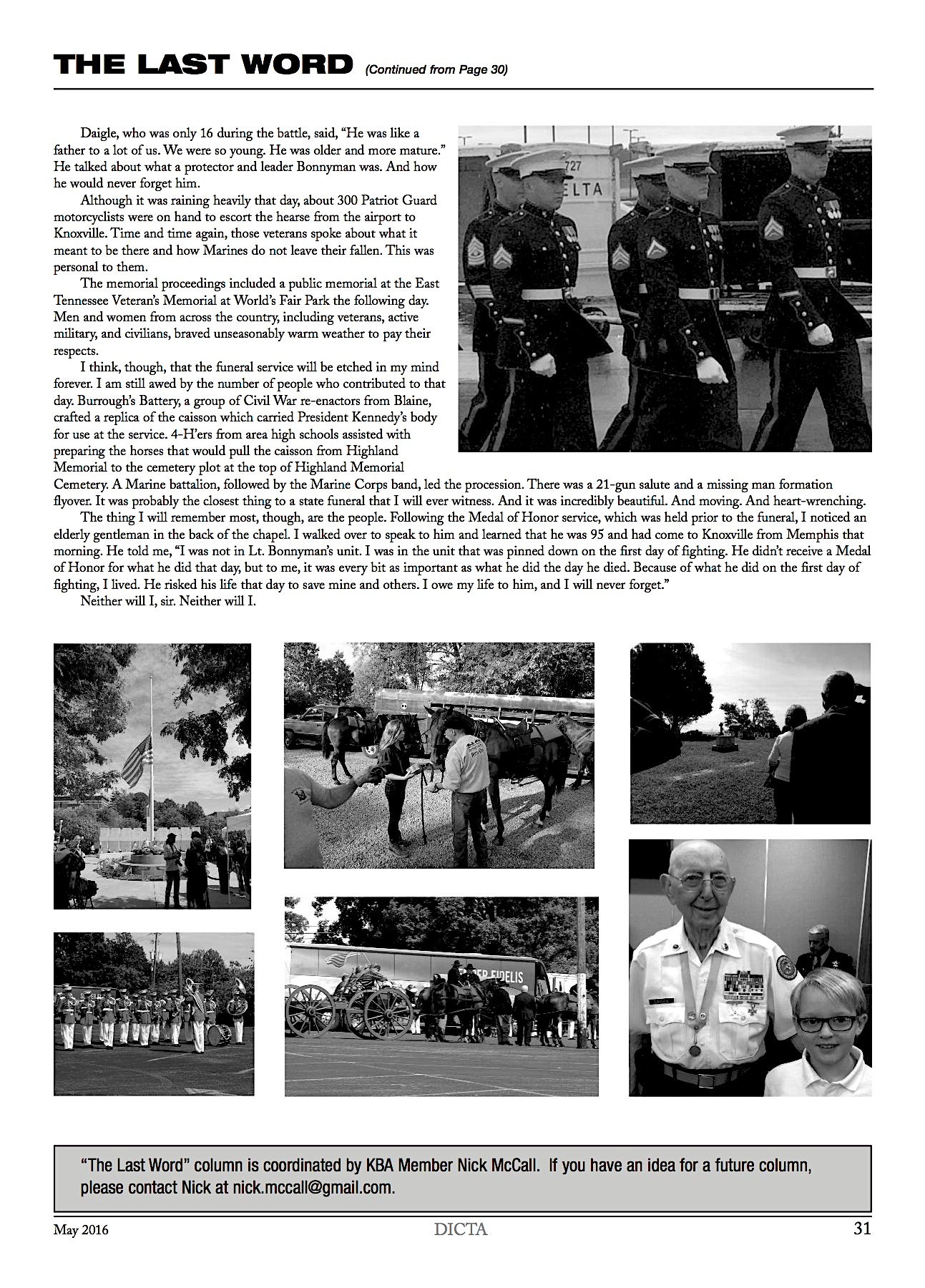 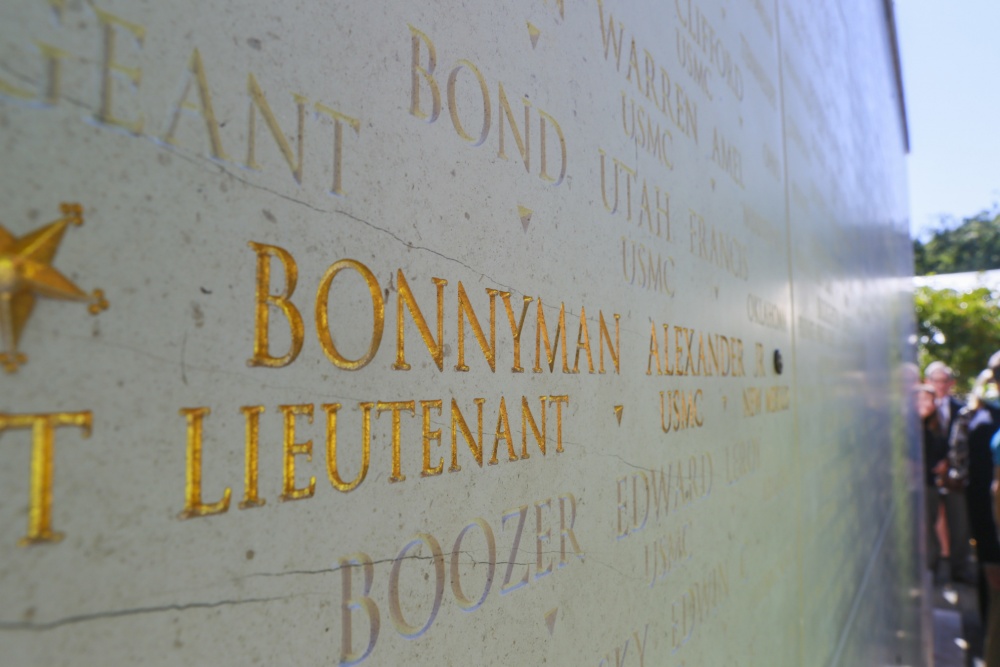 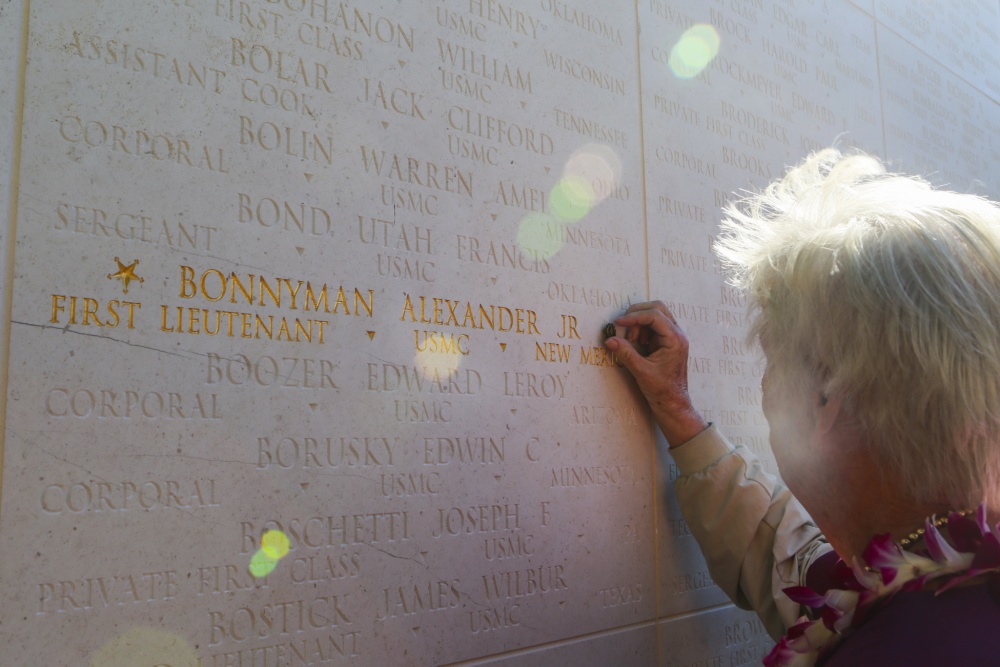 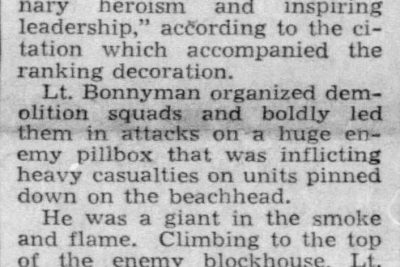