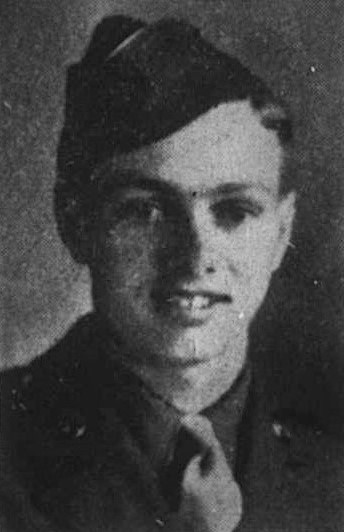 Rogersville review, June 21, 1945
Pfc. Albert Hawkins, age 20, son of Mr. and Mrs. Pat Hawkins of near St. Clair, was drowned in Denneville, France May 18, 1945. He had been in the service since February 26, 1943. He received his basic traning at Camp Wolters, Texas. He landed in Iceland Aug. 13. 1943 and was stationed there until spring then was sent to England. He served with the 29th Infantry Regiment in France, Belgium and Luxembourg. He attended Rogersville and Bulls Gap high school and was employed by J.C. Penny Co., Kingsport at the time he volunteered.
The following letter has beenr eceived by his mother from his  Captain, Charles R. Howard:
It is with deep regret that I fin dit neccessary to write you concerninig the death of your son, Pfc. Albert L. Hawkins on the 17th of May at about 8 o’clock in the evening. Albert and another soldier from the company, lef ton pass for a walk up the beach adjacent to our location at that time. They walked about a mile up the beach and coming to an inlet decided to cross it, since it was low tide at the time and the inlet was almost dry. Crossing to the other side, they rested and talked for a time and finally at about 10 o’clock decided to make their way back to camp. However, when they approached they discovered that the tide had risen, and so they decided to wade across. It soon became too deep even for that and the other boy struck out swimming for the opposite shore. Gaining the shore he called back to Albert but got no reply. He returned to the company after a short search and a search party was formed which later located Albert and took him to a nearby United States military hospital where he was pronounced dead at the result of drowning. He was buried in a United States military cemetery after a Protestant service conducted by a United States Army Chaplain. I have known your son since he joined this company some two years ago. During that time he became the friend and “buddy” of all the men in the company and attained the enviable reputation of being an excellent soldier, jovial friend, and an outstanding character. His loss is deeply felt by all of the officers and men in the company, and it is on behalf of them that I write you at this time to express the deepest sympathy of us all in your bereavement. May I express my own personal sympathy in your loss. Please feel free to call upon me for any additional information you may desire.
Chas. R. Howard, Capt., 29th Inf. Regt. Commanding.