Corporal Albert Carter was born on February 27, 1930, in Oliver Springs, Tennessee. He was the son on Tom and Ollie M. Carter. His siblings included brothers Ernest, Raymond, and Walter, and sisters Josephine, Marlena, and Rachel. He served in the Korean War as a member of Company C, 14th Engineer Combat Battalion. He was driving a vehicle near Nam Myon, South Korea, on December 3, 1952, when he was sideswiped by a tractor trailer carrying a bulldozer. The dozer blade struck his head killing him.

Corporal Carter was returned to the United States in February 1953 aboard the transport Iran Victory. He was the husband of Mrs. Jean H. Carter of Oliver Springs. He is buried at Frost Cemetery in Frost Bottom, Anderson County. 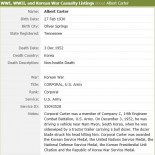