Born 31 May 1922
Died 9 October 1944
Killed in action while acting as first scout for his platoon near Echternach, Luxembourg
Buried at the Chattanooga National Cemetery, Y, 255

He received two Purple Hearts that I know of, for I have them along with the American flag. I don’t know if he received any other medals.
–Submitted by his niece, Veronica Douglas 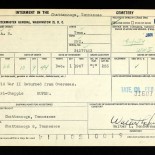 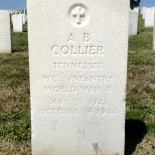