The idea for the East Tennessee Veterans Memorial was conceived in 1999 when J. William Felton III of Knoxville visited the Normandy beaches in northern France with his wife, Betty.

Felton, a retired colonel in the U.S. Army Reserves, was deeply moved by the thousands of white crosses and stars of David in the Normandy cemeteries, marking the graves of those who never got a chance to return home and pursue careers, raise families, further their education, own their own homes, or otherwise participate in opportunities and advances of post-World War II America. So he vowed to return home and work for a suitable way to honor and remember those who died.

During the ensuing months and years that Col. Felton doggedly pursued his dream, the scope of the project was expanded to include all names on the physical Memorial of those who died in military service from the beginning of World War I.

Consideration of the geographical spread for the project ranged from Knox County alone to the entire state.  Finally, the 35-county, regional East Tennessee area was chosen.  The counties are those of the eastern grand division of the state plus Fentress and Sequatchie counties.  Thus the project’s reach is from the Virginia border to the north to the Georgia border to the south, and from the North Carolina line on the east to the Cumberland Plateau to the west.

Early supporters of the East Tennessee Veterans Memorial were Knox County Mayor Mike Ragsdale and U. S. Rep. Jimmy Duncan.  At Mayor Ragsdale’s request, Knox County Commission approved $1.25 million for the project.  Rep. Duncan was instrumental in gaining approval by Congress of a $475,000 HUD grant. Kimberly Lauth served as the Operations Consultant through the dedication of the Memorial and provided the majority of the legwork in grant writing and general fundraising and still serves as a board member emerita.

On assuming his office, Knoxville Mayor Bill Haslam promised to find a site for the Memorial.  In early 2006, Haslam recommended – and City Council approved – the 8000- square foot plot at the northern edge of Knoxville’s World’s Fair Park. Ground was broken for the Memorial on November 10, 2006. Robert P. Murrian, a member of the ETVMA board and former United States Magistrate Judge, was the featured speaker.  His father’s name was one of those from World War II inscribed on the Memorial.  Two years later, on November 15, 2008, the $2.5 million Memorial had been completed and was dedicated and opened to the public.

The list of names for the Memorial was compiled and researched for the East Tennessee Veterans Memorial Association by Cynthia Tinker of the UT Center for the Study of War and Society.  At the outset, the list totaled less than 5000 names.  On completion of this meticulous process to check for completion and accuracy, the total is now over 6200.

The Memorial itself was designed by architect Lee Ingram of the Knoxville firm Brewer Ingram Fuller.

The goals of the East Tennessee Veterans Memorial project are to remember and honor, educate, and inspire.

Of those four noble objectives, education is the key. For in educating our citizenry of the sacrifices and service this region has contributed to our freedoms and way of life, we also honor and remember. And this knowledge inspires us to honor and serve our nation in the future.

The monuments and other structures that comprise the physical component of the Memorial were built on a 8000-square-foot plot in the north end of Knoxville’s World’s Fair Park.

As for the physical Memorial in World’s Fair Park, we have inscribed upon its series of granite monuments the names of more than 6200 veterans from 35 East Tennessee Counties who have died in military service beginning with World War I.  We also honor the 14 Medal of Honor recipients from those counties – names like Sandy Bonnyman, Buck Karnes, Mitchell Stout, and Alvin York.

The East Tennessee Veterans Memorial in Knoxville’s World’s Fair Park bears the names of more than 6200 veterans from 35 East Tennessee counties who have died in military service since the beginning of World War I.  Those counties are the 33 that comprise the eastern grand division of the state, plus Fentress and Sequatchie counties on the Cumberland Plateau.

Each pylon contains abut 220 names.  Letters are approximately a half inch high.  Names are sorted by conflict and further sorted by county within each conflict.  Names are randomly listed (non-alphabetical, non-chronological) within each county.  Blank space is provided for future names.

Names of each of the 14 Medal of Honor recipients from these counties are inscribed on the opposite side of one of the pylons.  These Medal of Honor recipients are:  James E. Karnes, Milo Lemert, James R. Talley, Calvin J. Ward, Alvin York, Raymond Cooley, Charles Coolidge, Paul Huff, Elbert Kinser, Troy McGill, Alexander Bonnyman, Charles McGaha, Ray Duke, Mitchell Stout.

A three-foot long granite bench is placed opposite each pylon for seated observation and contemplation.  Walkways within the Memorial are also in granite.  A circular plaza that forms the entrance features an American flag on a 50-foot pole.  Since the Memorial is lighted at night, the flag flies 24 hours a day.

Another feature is a 27-foot high bell tower.  On each of the four sides of the tower is inscribed one of the Four Essential Freedoms as enunciated by President Franklin Roosevelt in a speech to Congress on January 6, 1941 – freedom of speech and expression, freedom to worship, freedom from want, and freedom from fear.

Names inscribed on the Memorial were collected and meticulously researched for accuracy and completion by the University of Tennessee Center for the Study of War and Society. Names continue to be added annually after a careful process of consideration.   Dedication of these new names takes place with the Reading of the Names each Memorial Day. 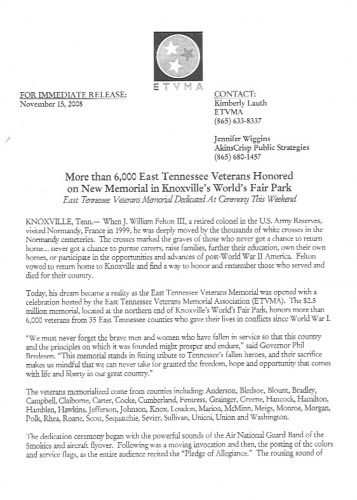 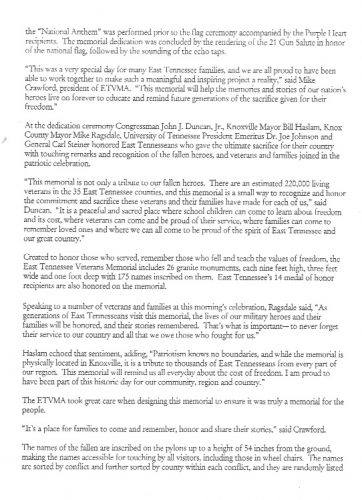 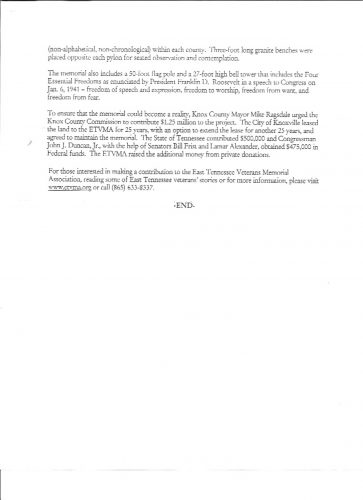 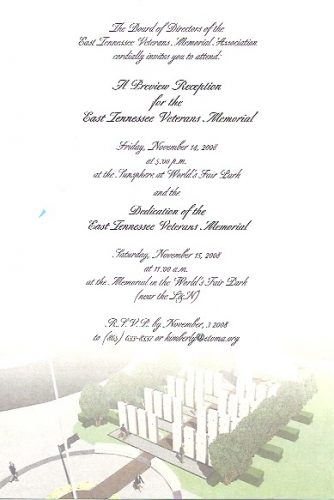 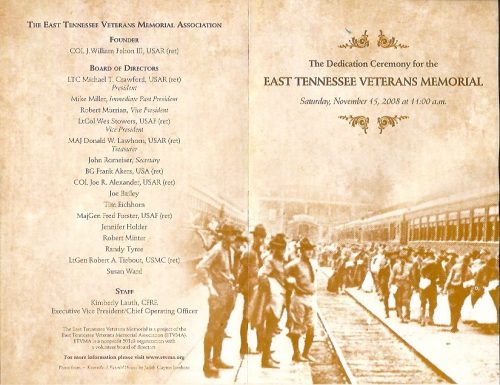 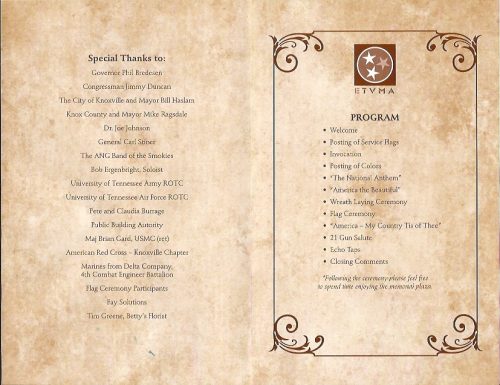 A dream that began in an American cemetery in Europe and on the beaches of Normandy came to fruition Saturday on the north end of World’s Fair Park after almost a decade of work by Knoxville citizens, politicians, Tennessee congressmen and the state.

More than 600 veterans and their families turned out to celebrate the dedication of the East Tennessee Veterans Memorial, braving wind and slight rain to pay tribute to East Tennessee’s war dead.

The $2.5 million memorial, hosted by the East Tennessee Veterans Memorial Association, honors more than 6,000 veterans from 35 area counties who died in conflicts starting with World War I. It grew from an idea that began after William “Bill” Felton III, a retired U.S. Army colonel, returned home from Normandy, France, in 1999.

Names of the veterans are inscribed on granite pylons that stand 54 inches high, making the names accessible for touching by all visitors, including those in wheelchairs. The names are sorted by conflict and then by county within each conflict. Granite benches are placed opposite each pylon for observation and contemplation.

The memorial also includes a 50-foot flagpole. A Marine guard detail raised the American flag over the memorial for the first time during Saturday’s ceremony.

A 27-foot-high bell tower stands at the rear of the memorial and the pillars. It is inscribed with the four essential freedoms President Franklin D. Roosevelt mentioned in a speech to Congress Jan. 6, 1941: freedom of speech, freedom of worship, freedom from want and freedom from fear.

During the ceremony, Felton presented an American flag to retired four-star Gen. Carl Stiner of LaFollette, who then held it out to be touched by representatives from the nation’s modern wars.

“This is just phenomenal,” said Duncan, who was instrumental in getting $475,000 in federal funds for the project. “I wish this had been done a long time ago,” said Duncan.

“Very few cities even larger than Knoxville have something like this,” said Duncan, himself a veteran of the U.S. Army National Guard. “It will inspire children to love their country more.”

“This is a great event,” said John A. Keys, Tennessee commissioner of the Department of Veterans Affairs. “This will let children know and understand what sacrifices the veterans have made to the nation and this city.”