Monday, May 5, 2014
at the Historic Foundry Building 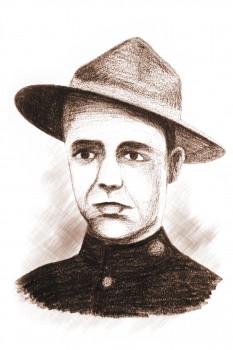 Calvin J. Ward, a Greene County resident, was the most highly decorated soldier in WWI — yet, sadly, few people outside of Morristown and Greene County have ever heard of him.

The featured speaker for the evening will be Dr. Michael Birdwell, from Tennessee Tech University, who is a world renowned expert on the Argonne Forest Military Campaign.

The Knoxville Medal of Honor Convention commissioned a 47-minute documentary, The Medal of Honor: A History. The documentary details, for the first time in history, the colorful story of the Medal’s rough and tumble beginnings in Congress during the Civil War to the exalted place it now holds as our nation’s highest military honor.

Recognizing the Medal’s importance in our culture, this documentary tells the fascinating and inspiring story of the Medal of Honor. From engaging interviews with military historians and the experts closest to the process, to polished graphics and rare archive footage, it will be a beautiful, bold telling of one of our nation’s most important stories.